The first anniversary of the Women’s March is behind us, but for many activists around the country, the work is just beginning. To that end, Asian Arts Initiative’s new exhibition, Those Who Talk Back, features the Protest Banner Lending Library and the U.S. Citizenship Sampler Test by needlework artist Aram Han Sifuentes. It’s running February 2 through April 6.

Where arts, activism, and advocacy meet

The Protest Banner Lending Library is a collection of hand-sewn banners and flags bearing motifs like “Black Lives Matter,” “Nevertheless We Will Persist,” and “Fight Ignorance Not Immigrants.” It debuted at the Chicago Culture Center, where it caught the attention of Carol Zou, director of programs at Asian Arts. When Sifuentes told Zou she was looking to bring the library to a new city, Zou jumped on the opportunity.

“I have been admiring Aram's work for a long time,” Zou says. “I thought her entire body of work would be poignant and significant to our current political moment and address multiple communities that were interested in craft, visual arts, socially engaged art, political activism, and immigration advocacy.”

Those Who Talk Back focuses on issues surrounding immigration and the rights of undocumented people, which particularly concern Asian American communities, Zou says. “Because of the model minority myth, the presence and vulnerability of undocumented Asian Americans are typically obscured.”

Sifuentes herself is an immigrant, having come to the United States from Korea when she was six years old. Her parents got work at a dry-cleaning business, and sewing became a part of Sifuentes’s everyday life. As a result, the act of sewing has political and social significance for her.

“My mom became a seamstress and she was always bringing a bunch of work home with her. So, I learned how to sew in order to spend time with and help my mom. It wasn't a choice for me,” Sifuentes explains. “So for me, I cannot see the act of sewing without thinking about my experience with it growing up in a poor, racialized immigrant household, where my parents sew for a living.” 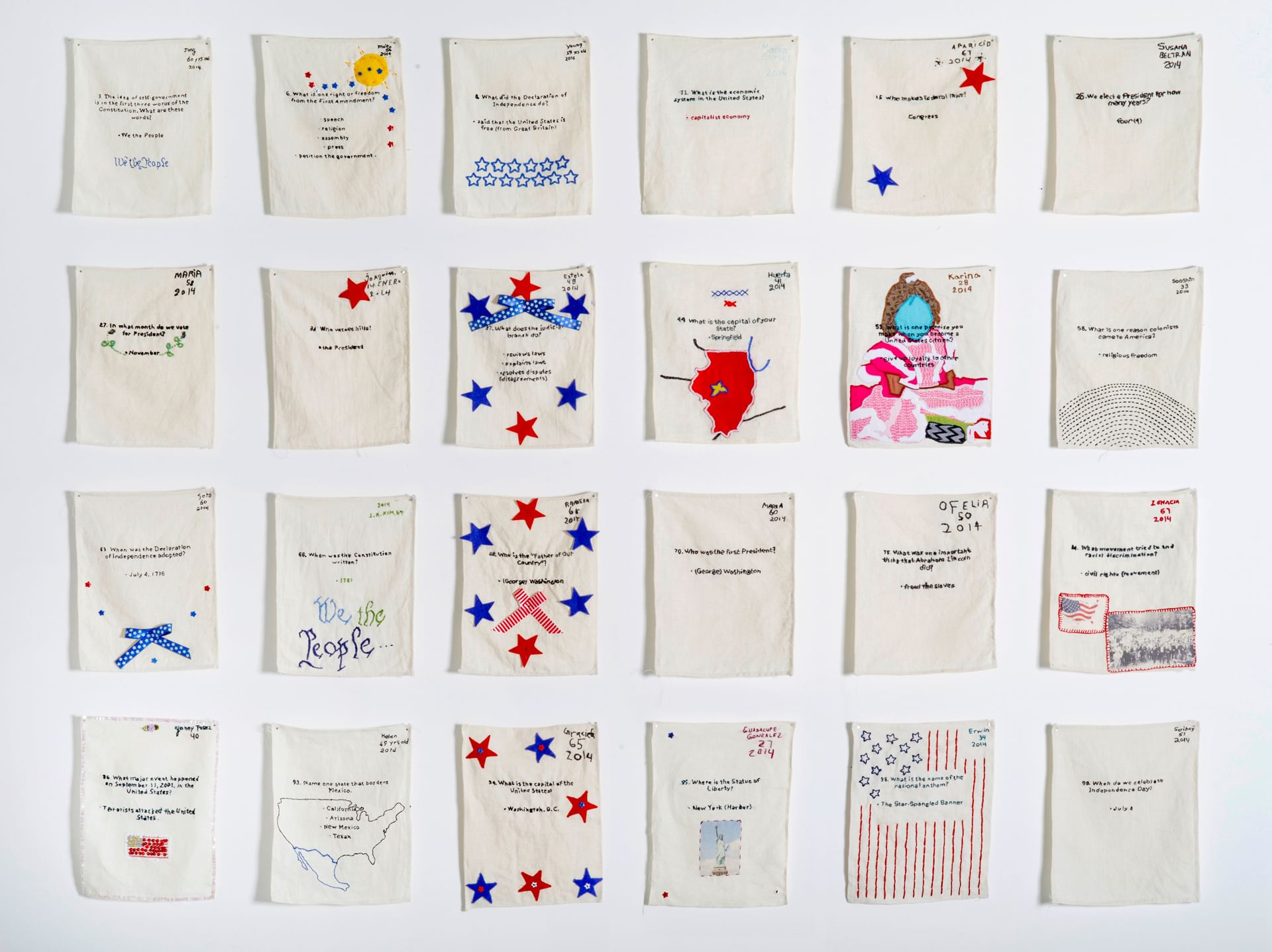 The library is also rooted in Philadelphia’s local politics. Because of the collaborative nature of the project, the banners on display represent the issues closest to the hearts of the city’s residents, including education, the local school board, and mass incarceration. Zou hopes to connect with local organizations working around these issues and planning direct actions over the course of the exhibition’s run.

And the library is just what it sounds like — according to Asian Arts, patrons will be able to check out and return protest banners if they want to take any of the exhibition’s messaging to the streets.

The exhibition also features the U.S. Citizenship Sampler Test, where Sifuentes and others sew answers to the questions that appear the U.S. Citizenship Test. The project was born when Sifuentes was preparing to take the test herself and was inspired by the historical use of sewing as a way of teaching young girls the alphabet and numbers. Now Sifuentes uses it to support the citizenship aspirations of other immigrants. When completed, the samplers are sold for $725, the cost of applying for citizenship, and the money goes to the person who made it.

“I make this work for my immigrant noncitizen community. We make these samplers together to study the citizenship test material. It is also important to point out that I put on these workshops oftentimes in places that don't have or allow art classes for immigrants, so this is my act of subversion — to say it is about learning the citizenship-test material for us to sit and sew together,” Sifuentes explains.

Those Who Talk Back is running at Asian Arts Initiative (1219 Vine Street, Philadelphia) February 2 through April 6, with a First Friday opening reception on February 2 from 6 to 8pm. There will also be two free workshops: one on February 10 (featuring an artist talk) and one on March 17. Advance registration is required for workshops. Gallery hours are Monday through Friday, 10am to 6pm.

Above, at right: A selection of U.S. Citizen Sampler Test needlework on display in Chicago. (Photo courtesy of Aram Han Sifuentes.)