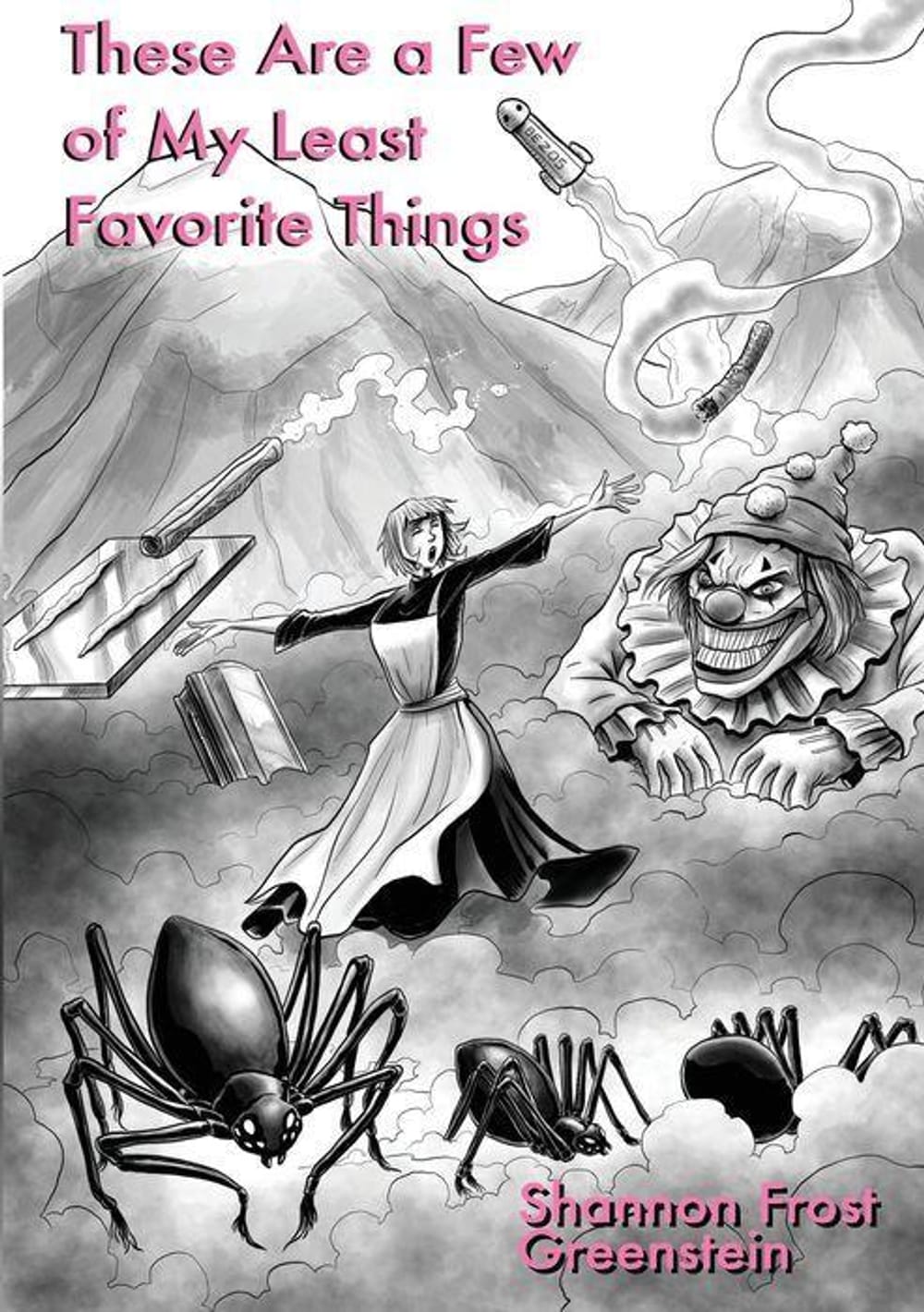 The ink-drawn front and back cover of Shannon Frost Greenstein’s These Are a Few of My Least Favorite Things, illustrated by Shawn Dubin, perfectly captures the central anxiety of the book’s contents. In keeping with the parodic title, an ersatz Julie Andrews sings as she overlooks the Bavarian mountains. But instead of there being open air and green grass to underline her joy, she’s surrounded by a threatening fog of killer clowns, giant spiders, coffins, rails of coke, billionaires on half-baked space missions, and cigarette butts. If terror is a part of daily existence now, what’s the point of categorizing fears as “rational” or “irrational”?

Throughout the poems of My Least Favorite Things, Frost Greenstein confronts the central question of how to cope with, let alone endure, the crushing anxiety, fear, and sometimes literal toxicity of being alive in 2022. It’s hard enough dealing with the inadequacy Frost Greenstein confesses to in “Jan Brady Syndrome Is a Thing, and Also, No One Likes Me,” or the mental illnesses which “run amok through my limbic system.” Knowing “Billy Nair’s on the Moon” while the world is falling apart just makes daily life even scarier, “the rest of us mired in the quicksand of status quo.”

Snapshots of the apocalypse

Horrifically and hilariously relevant to 21st-century living, Frost Greenstein’s poems feel sometimes like a carefully organized cascade of rushing thoughts. Her anxiety attacks and worst fears are all collected within, but have been streamlined and translated for maximum perusal. Current reference points like Lin-Manuel Miranda and Larry Krasner provide a contemporary framework to these pieces as well. For better or worse, These Are a Few of My Least Favorite Things is a snapshot of life, moment by moment, as lived by a savvy wife, mother, and writer immersed in the city.

The best of the pieces, like the devastating “Penn Medicine Would Like Your Feedback,” actually use the dehumanized, mechanical quality of corporate text and street signs to arrive at raw, personal revelation. The contrast in tone and emotion alone underlines how deceptive these texts are by nature. If the apocalypse is already here, then perhaps the first thing that will have to change is the lying, soothing language of the window display that tells us to “Keep Calm and Carry Naloxone,” or even the platitudes Frost Greenstein stops herself from giving her husband after his cancer returns.

The author is also well aware that her work has a certain “bleak outlook on the world,” as Tony Soprano, another serotonin-challenged Mid-Atlantic resident, would say. Late in the book, she wonders why “all of my poetry is so… / depressing / when I am lucky to have the gift of breath at all?” Frost Greenstein may look into the abyss, but she also knows how to step back, and to find solace in the things that give her joy: her husband, her children, the cigarettes she shouldn’t use but sometimes still smokes “down to the filter,” just to make her lizard brain happy for 30 seconds.

There are no easy answers in the book for fellow anxious frazzled wordsmiths and readers looking for the way to infinite happiness. One poem looks at how “radical acceptance” can seem like an absurd impossibility to a brain used to self-loathing and trauma. All Frost Greenstein can do, even as the clowns and coffins circle around her, is recognize “love, just this one thing that is everything and the only thing.” In the final poem, “Today,” she chooses to accept the failures (and successes) of daily life despite how crushing the world can be. The next morning won’t have to “creep in this petty pace,” but will instead be another chance for her to get it right: “Today / I lived and / tomorrow / I will live again.”

Exploring Philly Nature: A Guide for All Four Seasons, by Bernard S. Brown

The wild things are here