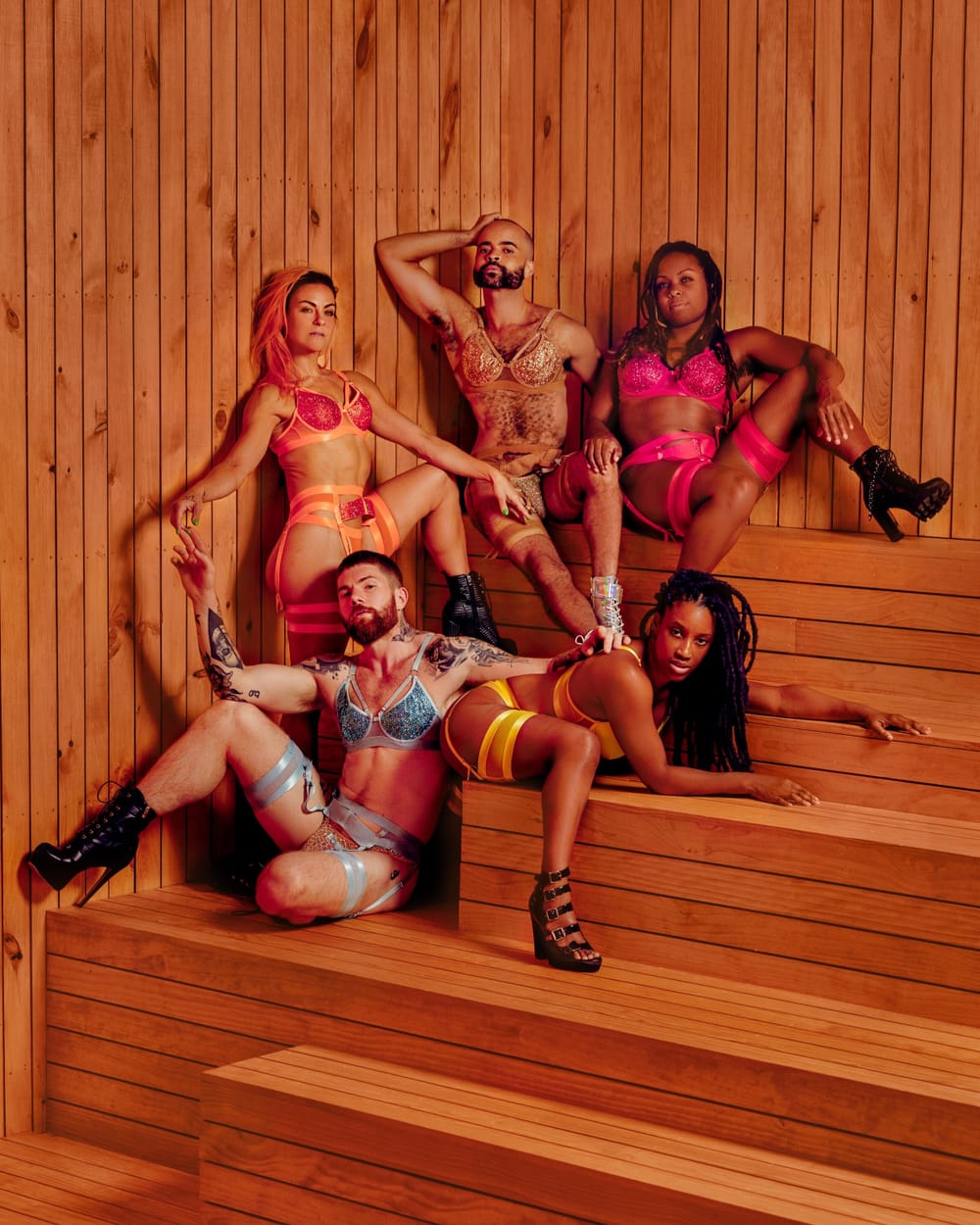 The audience enters BATH HOUSE through a dim corridor hung with plush, oversized bathrobes. Fog machines create the illusion of steam, and wood paneling and plants inside the performance space create the effect of entering a sauna. Neon lights and EDM tracks with thumping bass ramped up the sexiness suggested by the show’s title, which alludes to the gay bathhouses popular during the 20th century that offered important spaces for both sex and community. But this entertaining and engrossing performance from Gunnar Montana Productions expands the concept of the bathhouse to celebrate diverse forms of sexuality and bodies of various genders, shapes, sizes, and skin tones.

Creative director, producer, and performer Gunnar Montana developed the choreography in collaboration with cast members Jessica Lynn Daley, Frank Leone, Danielle Currica, Mika Romantic, Desirée Navall, and Nikolai McKenzie Ben Rema. The performance begins with nuanced displays of physical and sexual energy. First, two male-presenting dancers wearing platform stilettos, sequined bras, garters, and thongs strut up and down a neon-lit set of stairs as a recorded voice intones “I’ll make you lose your mind” over the beat. Their movement combines strength with vogue femme-style movement to incorporate masculinity, femininity, and the broad spectrum in between. The next scene offers a different spin on this concept as three female-presenting dancers clad in BDSM-style harnesses lift prop weights. Daley, Currica, and Navall dance and tumble around a revolving weight bench to a track that repeats “work that body.”

Next, BATH HOUSE explores the intersection of sexuality and the divine. A bowl of holy water appears, and dancers spritz themselves and the audience. Leone portrays a nun whose robes and habit conceal bondage gear. Clad in a lacy white dress, McKenzie Ben Rema resembles a holy virgin, a bride, a girl receiving her first communion, and finally a priest waving a censer. In the following scene, McKenzie Ben Rema and Montana suggest a different form of holiness. Their duet depicts a casual sexual encounter charged with erotic and emotional power as it alternates between passionate simulated sexual acts and elegant, dramatic lifts. When the couple parts at last, McKenzie Ben Rema saunters off with a smile. Montana looks on with a poignant expression of wistfulness, his character not quite ready to walk away from the experience.

BATH HOUSE continues to unfold in a spirit of physicality, grace, and reverence for bodies and the way they move, together and alone. Other standout sections include burlesque entertainer Romantic in a giant hat and sheer red dress, performers bathing themselves and each other, tangles of bodies on stage, a mesmerizing scene lit by a disco ball, and acrobatics and aerial work in a tall, square metal cage carpeted with faux greenery. A trio dance for Leone, McKenzie Ben Rema, and Montana evokes multiple partners sharing pleasure. It also highlights the latter’s prodigious strength as he holds the two other dancers simultaneously. Daley and Navall dazzle in an aerial scene inside a spinning metal rig shaped like a bathtub. Set to a cover of Kate Bush’s “Running Up That Hill (A Deal With God)” (1985), it captures the dizzying, joyful, tender, and all-consuming experience that enthusiastic partnered sex can offer.

The event advertises that vaccination is required, but proof of vaccination was not requested or checked at the venue. Masks are optional.

For viewers 18 and older. This performance contains strobe lights and fog/smoke effects.