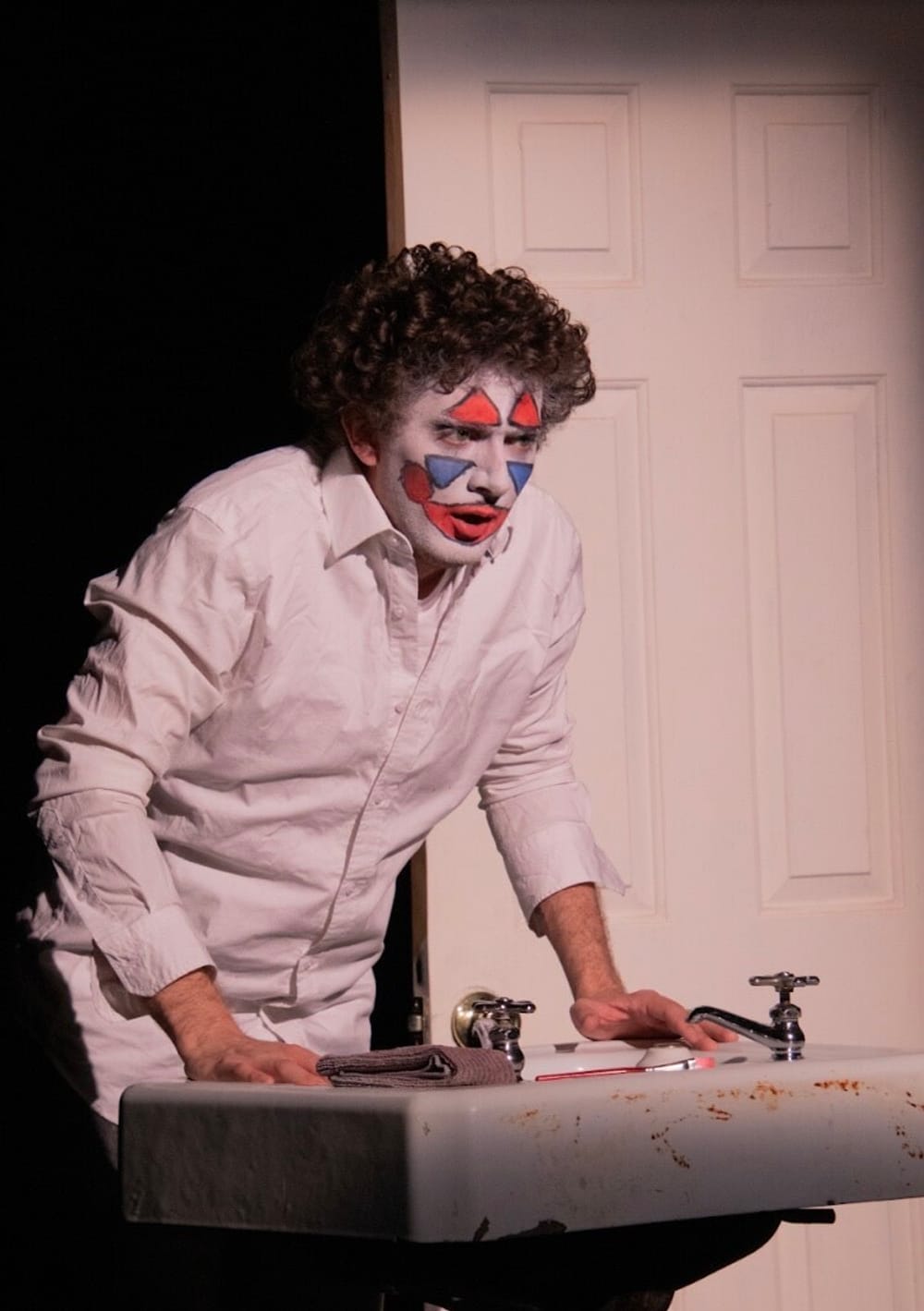 A clown walks into a funeral?

It might be the premise of a quick joke, but Facepaint, a Fringe production from Eat Purple Theater Co., a young independent artists’ collective, takes the bit and runs. The professional clown is Harold (playwright Collin Spangler), a 30-ish newlywed who decides to wear his clown makeup to a dear friend’s memorial service.

One of the only mourners there, Harold is approached by a young priest who suggests that this, ahem, might not have been the most fitting occasion. There is a brief altercation, and Harold storms out. But when he goes to wash off the paint, he finds that no amount of scrubbing will wipe off the gooberish grin of a clown.

Meanwhile, his wife, Maria (Shelby Billups), is spending a night out with Annette (Clare Grundstein), her demanding boss and a woman derailed by infidelity and the end of a seven-year marriage. Maria returns to find her husband in comic extremis, and the play unravels over two or three days of Maria tending to the emotional needs of Harold while administering to Annette, all too ready to drink herself to death and decry the infantilizing lie of marriage. Facepaint is a sometimes goofy, sometimes dark exploration of passivity, doubt, shame, and marriage.

The play is on the shorter side and comes into its own in the second half, as the cast settles in and the characters gain more dimension and chemistry. Spangler stands out as Harold: their gawky movements embody the awkwardness of someone using humor to deflect discussion of real emotions, and there’s no question that their exaggerated deadpans are Harold’s performative personality coming through. Billups and Grundstein give convincing performances as Maria and Annette, and both deserve a round of applause for bringing a believable degree of humanity to their extreme characters.

The play is observant and does a decent job of constructing the closed world of its three main characters. However, there are some gaps in believability that the play declines to recognize: why would Harold be okay wearing face paint to a funeral, yet later be too self-conscious to answer the door for pizza? Would a priest really be caught in a crisis of faith about the general existence of evil in the world after presumably taking Seminary 101? Would Maria really continue to work for Annette, as devoted to helping people as she is?

These gaps can make the more intentional absurdity less effective. Fortunately, the play’s premise saves the day, and under the direction of Zaina Yasmin Dana, the production creates a chaotic sleight-of-hand that distracts the audience for these gaps.

This is Eat Purple Theater Co.'s first Fringe production, and the small group’s energy is evident: the ensemble performs its own scene changes, tears around the stage, and delights in stormy discussions. It feels at many times like a student production, but a promising one that cheerfully mixes elements of Tennessee Williams drama with Martin McDonagh humor. The play ran for only one weekend at Norristown’s Theatre Horizon stage, but it was worth the trip and the cost of admission to support a scrappy group with an on-the-nose play.

There will be an additional performance of Facepaint on Wednesday, October 5, at 7pm at Swarthmore's Park Avenue Community Center; $15 for tickets at the door.

Proof of Covid-19 vaccination was not required to attend; masks were required in the theater.

Theatre Horizon is a wheelchair-accessible venue.