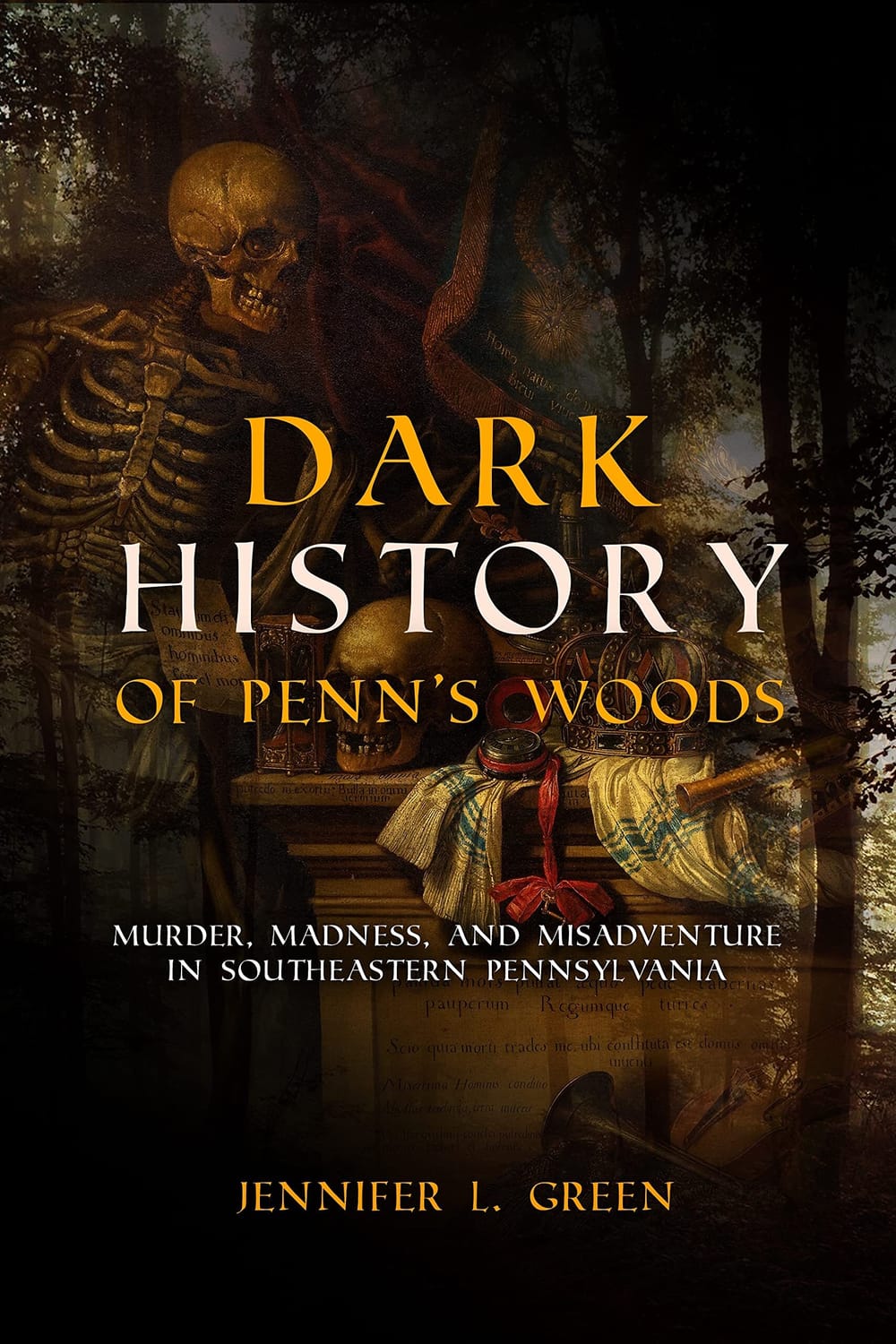 Full disclosure: when I got an invitation to write a BSR review of Jennifer L. Green’s Dark History of Penn’s Woods: Murder, Madness, and Misadventure in Southeastern Pennsylvania, I had already purchased my own copy. I am myself a historian and writer about the darker corners of history (my second book, Haunted History of Philadelphia, will be published later this year). I was eager to read Green’s book. After doing so, I cannot recommend it highly enough.

Green received her master's degree in American History from West Chester University, and her skills both as a researcher and a writer/storyteller are unparalleled. So many books have been written about the dark side of Philadelphia, but Green instead focuses on tales from the long-ago past of Chester and Delaware Counties, mining a rich vein of truth and folklore that few, if any, before her have attempted. Throughout the book, she iterates that she is writing about history that has been largely forgotten and ignored due to its dark nature. By bringing these stories to the light again, she has given her readers a great gift.

In her introduction, Green gives a brief but incisive survey of how Pennsylvania came into being, paying honor to the Indigenous population settlers displaced while also describing how William Penn’s ideal for Philadelphia and the land surrounding it was a utopia impossible to maintain. As crime and debauchery made their natural course, Green highlights that these human acts were “our evil twin, our shadow,” and the rest of the book describes a multitude of ways the uglier and stranger sides of humanity dealt with that dichotomy in this particular place and time.

The book’s eight chapters are all astutely judged and diverse in theme. Green brilliantly provides the necessary historical context for each tale, not in a dry or academic way, but drawing the reader seductively in with the truth. In a chapter about the first witch trial in Pennsylvania—William Penn himself presided—Green gives the background of the English and Scottish views about witchcraft that directly informed this trial in the new world. With a chapter about the gruesome methods of disposing of General Anthony Wayne’s corpse, she lets us in on the history of boiling human bones. A chapter about the horrific death of Helen Conway from spontaneous human combustion reveals a timeline of the most notable cases and the proposed scientific reasons for why they happened.

Green knows her stuff, and she knows when to include a delicious piece of folklore, while also having the integrity to refute it when surviving historical records show that the truth is different.

Green is so skilled as a writer that she puts you directly in the place of these historical figures, often with surprising results. Whether it’s Elizabeth Wilson’s brother trying to get to his imprisoned sister with a pardon before she is hanged for (perhaps) murdering her infant children, the people who tried to survive the “Frankenstorm” of 1843, or the harrowing and disturbing story of Sarah Oberle and the treatment of mental illness in the United States, Green puts you right there on the journey, asking important questions. She’s also skilled at placing these long-ago events in a modern context, almost always relating them to events and practices that are still ongoing in the 21st century.

I didn’t want the book to end. But I must content myself by waiting for whatever Green writes next, because I’m sure it will be great. There are stories and images within this book that will haunt your nightmares, and perhaps encourage you to learn more about the rich treasures of hidden history lurking in your own backyard, wherever you live. Read Dark History of Penn’s Woods alone in bed on a dark and stormy night. I dare you.