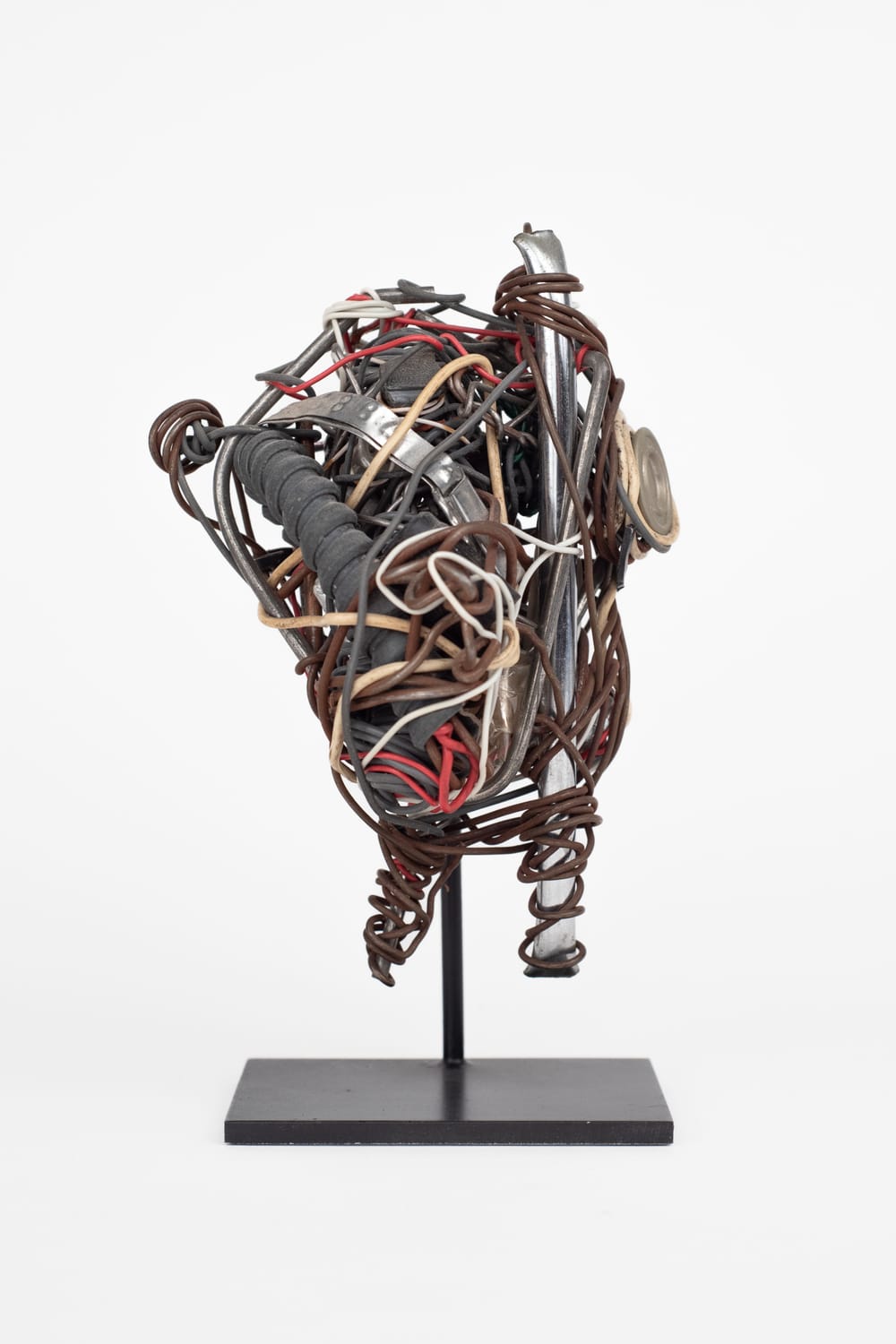 Offering a joyous escape from the bad-news cycle of reality, artist Jayson Musson has dreamed up a sitcom, Jayson Musson: His History of Art. In three episodes debuting at the Fabric Workshop and Museum (FWM), Musson plays Jay, a pompous art insider who explains themes in art to his sidekick (a rabbit-like puppet named Ollie) in order “to expand Ollie’s horizons.” It’s art history meets Sesame Street for grownups, and it’s especially intriguing paired with another local show inviting the viewer to question what is art, what’s not, and who decides: an exhibition of works by the anonymous Philadelphia Wireman.

In His History of Art’s first episode, “Hey Young World,” Jay and Ollie explore the power of art and the magical Theater of Unfabricated Dreams while trying to outwit the local gang of bullies, the Cool Popes. “Caveman Days” spotlights the relevance of art history, and the fertility of artistic inspiration is explained by Willa (a Venus of Willendorf costume sported by FWM senior project coordinator Abby Lutz), a Caveman, and a Sexy Bison (FWM project coordinator Avery Lawrence). Inspired, Ollie decides to become an artist in the third episode, “Dipping Toes.” Pablo Picasso and Gertrude Stein visit Jay’s living room to debate the nature of artistic genius, and while art gets broken during the ensuing shenanigans, friendship prevails.

At work at FWM

In early July, Lawrence gave BSR a tour of the half-built exhibition on FWM’s second floor. Visitors can watch the three episodes; see the set; and view backdrops, sketches, story boards, and costumes. The main set is Jay’s living room, where a chaotic collection of paraphernalia and artworks, from ancient to contemporary, are crammed around a ludicrously frumpy couch. Some of the artworks are puppets: three snowballs pay homage to David Hammons’s Bliz-aard Sale (1983). Other objects are mashups. Lawrence says the melting watch from Salvador Dalí’s The Persistence of Memory (1931), created for the set by artist Jacqueline Riccio, is also a Rolex from the 1991 film New Jack City, directed by Mario Van Peebles. It also seems possible that the Jay/Ollie dynamic is a riff on Joseph Beuys, whose 1965 How to Explain Pictures to a Dead Hare performance piece and personal mythology were cited in Musson’s March 2011 YouTube episode of ART THOUGHTZ with Hennessy Youngman: Beuys-Z.

“Anonymity allows one to do what they do in peace … each artist must chart their own tumultuous path through the mistake of choosing to be an artist,” he says. He is represented by two galleries: Salon 94 in New York, known for its maverick spirit; and Fleisher/Ollman Gallery, which specializes in Outsider Art and also represents the Philadelphia Wireman.

Although he has become a celebrity, Musson remains anonymous himself, in a way, speaking through his Hennessy Youngman character and spoofing elitism through the Jay/Ollie dynamic: “There are centuries of ideas to play with in art history, which is really human history.” Comedy, Musson says, is “a useful tool in exposing inequality and grand social failings,” like the outsized roles luck and chance play in all of our lives.

What we know about the Wireman

That perspective certainly applies to the anonymous maker known as the Philadelphia Wireman, who like many art-world outsiders was clearly gifted with an innate sense of aesthetics. Here’s all we know about this artist: 1,200 astonishing sculptures were left out for the trash in the late 1970s. The artist probably lived in poverty, unrecognized for their talent, and left in a hurry—either died or was evicted.

A local designer noticed the alien-looking objects on Juniper Street, scooped them up and took them home. A few years later he sold them to the Janet Fleisher Gallery, then directed by John Ollman, who was thrilled by the objects’ bizarre power and presence. Ollman now owns Fleisher/Ollman, and 35 of the Philadelphia Wireman’s works are on display at the Spring Garden Street gallery through August 19.

The Philadelphia Wireman made art by hand-twisting wire around found objects, such as a timing belt, a “Hill for Mayor” button, an Acme bag, a hypodermic needle, a ribbon, a nickel. The solo show, deftly curated by Fleisher/Ollman director Alex Baker, is a rare opportunity to see so many of the sculptures at once. In the work’s last appearance in Philadelphia, two pieces were displayed in the comprehensive 2020 UArts exhibition Invisible City: Philadelphia and the Vernacular Avant-garde, curated by Sid Sachs.

The current Philadelphia Wireman exhibition is a perfect size: a lot to take in, but not overwhelming. Baker’s choices are mostly 10 inches high or smaller, typical of the Wireman’s output (though a few of the artist’s works were created around larger armatures like broken umbrellas, none so large are on display here). On a recent Tuesday morning, a flustered man burst into the gallery for directions. He froze, encircled by the enigmatic sculptures on a single level of narrow shelving around the pristine walls. His urgency vanished. He stared for a moment, then asked, “What are they?”

Good question. They are off-kilter, these petite wire tornadoes clutching, hiding, or flourishing their treasures. We can try to identify the materials, and try to classify the pieces as looking like something else. (A dog? A human?) Their outlines shape our perception first, followed by a closer look at the bundled materials. Untitled, No. 1111 is a triangular form with a preppy-looking watchband. Like many of the works, it seems friendly, almost like a character from His History of Art. Keep looking, though, and the somber presence of these objects begins to raise questions about that amiable first impression.

Untitled, No. 432, with red and white wire, seems from one angle to be a pudgy entity jumping for joy. Seen from another side, it conveys a whole new mood, stark and oddly skeletal. Looking at these pieces is like unwittingly joining a staring contest: they look back at us, unblinking, impassive, opaque. We’ll never know the artist’s intentions; we only know that they are extraordinary. Unlike Musson’s His History of Art, they reveal no secrets; yet they are strangely uplifting. Both exhibitions are enormously satisfying visits to alternate universes, and we come home refreshed, walking on air.

Philadelphia Wireman. Through August 19 at Fleisher/Ollman Gallery, 915 Spring Garden Street, Suite 215, Philadelphia. Open Mondays through Fridays through July and in August by appointment. Free. (215) 545-7562 or fleisher-ollmangallery.com.

Masks are required inside the Fleisher/Ollman Gallery.

Masks required (regardless of vaccination status) for visitors over the age of 2 years.

Entrance to Fleisher/Ollman Gallery building, on N. Percy Street, has three stairs; an elevator is available in lobby.

Entrance to the Fabric Workshop and Museum is barrier-free; an elevator is available.

Many months later, how has the Walnut Street Theatre answered a community rallying for equity?

Where do dancers discover themselves?

Living in a cinema's paradise