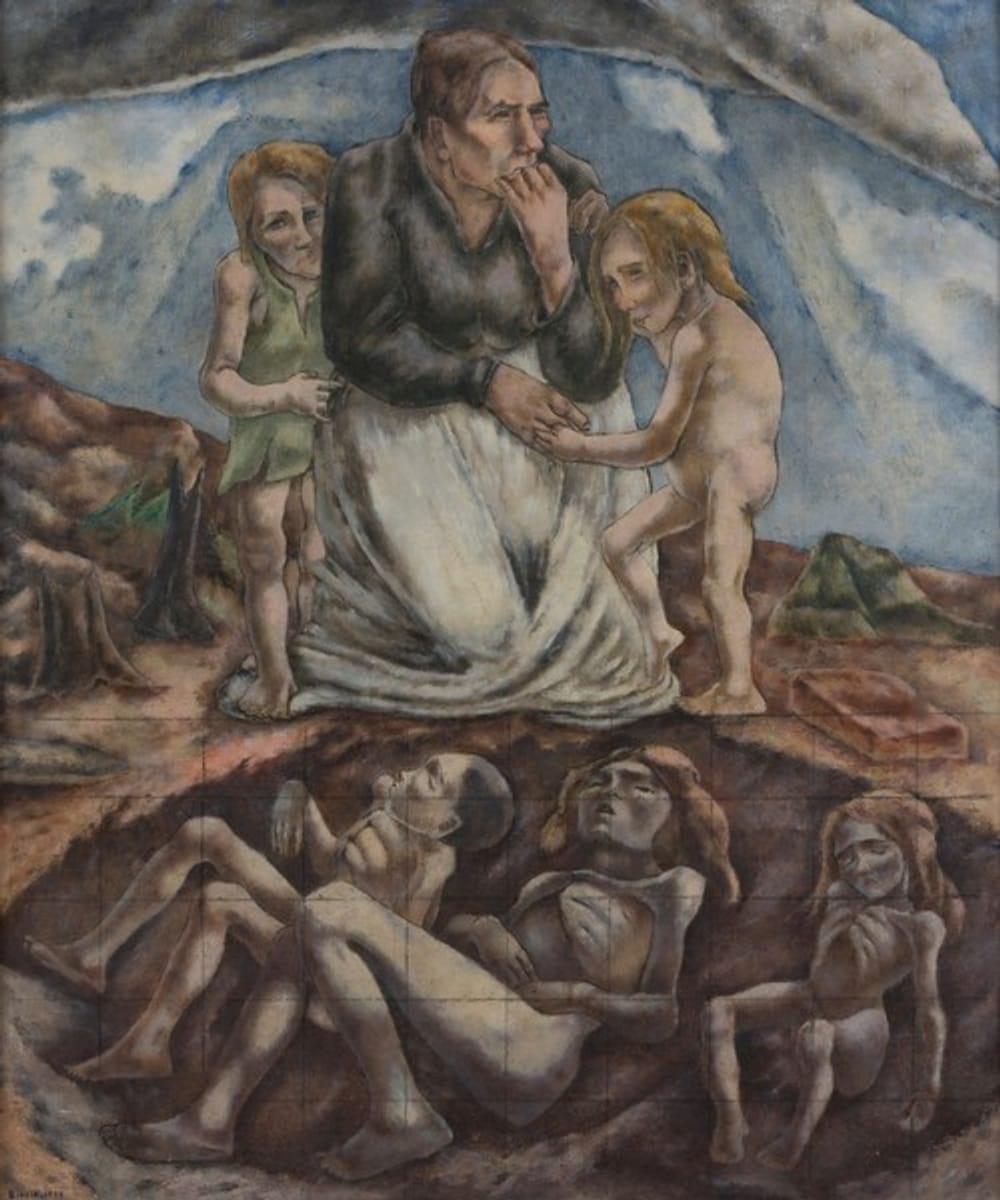 George Biddle held a mirror up to the world with natural talent and the access into which he was born. Son of an iconic Philadelphia family, educated with Franklin Delano Roosevelt, and mentored by Mary Cassatt, the artist and his six-decade career are considered in Woodmere Art Museum’s George Biddle: The Art of American Social Conscience.

Throughout life, Biddle (1885-1973) believed in noblesse oblige, that with privilege comes responsibility. He did not shrink when faced with fearsome events and difficult issues.

Serving in France during World War I, Biddle, fluent in French and German, was assigned to interrogate prisoners. Those encounters, and witnessing destruction and death, strengthened Biddle’s stance against war. It became a creative theme that even found its way into his self-designed bookplate, which depicts Death as a skeleton astride a mad horse. Encircling the image is the Latin motto: “Nor hatred, nor ignorance, nor fear, shall ride our world.”

The apocalyptic rider appeared frequently, notably in The Cannibalism of War Contrasted with the Creative Elements of Peace (1945), a mural and bas-relief sculpture for Mexico’s Supreme Court that Biddle created with his wife, sculptor Hélène Sardeau. In the section on view at Woodmere, Death is surrounded by a maelstrom of angry animals clawing the horse and biting the rider as a prehistoric human watches.

Mexico shaped Biddle as an artist. His first visit coincided with the rise of muralists such as Diego Rivera, who celebrated the common people and criticized their exploitation. In a recent Antiques Magazine article on Biddle, Thomas Connors wrote, “His encounter with the Mexican muralists in the 1920s confirmed his philosophy that art is an act of intellectual and emotional engagement.”

In 1933, Biddle and a colleague proposed a public art program to President Roosevelt, with whom Biddle had attended Groton and Harvard Law. It became part of the New Deal and, though short-lived, inspired subsequent projects and provided meaningful work for artists during the Depression.

Biddle also emulated the Mexican muralists in irritating the powerful. His mural Society Freed through Justice (1936), for the Department of Justice building in Washington DC, contrasted the fruits of a just society with sub-human living and working conditions. The stark comparison, and the work’s inclusion of Jewish and Black figures, did not please the Fine Arts Commission, but Biddle intended his art to faithfully represent the American people. Connors quoted him from 1934: “No more Hellenic nudes representing the spirit of American Motherhood, Purity, Democracy, and the Pioneer Spirit.”

Showing the world as it was

Whatever the medium, Biddle represented the world as he saw it. Illustrating the libretto for Porgy and Bess: An Opera in Three Acts (1935), which George Gershwin conceived for Black classical singers, Biddle visited the streets of Charleston, South Carolina, and created lithographs populated only by African Americans.

Covering World War II as an artist-correspondent, Biddle drew wounded soldiers and battlefield surgeries. He led the US War Artists Committee, and embedded with troops in Tunisia for six months. At the Nuremberg trials, where his brother Francis, a former US attorney general, was a trial judge, Biddle observed the men who’d orchestrated the Holocaust. He described them as having “dull faces, stooped shoulders, haphazard clothing, vacant stares.” In 36 to be Hanged (1946), he sketched six men who bear none of the vicious characteristics Biddle lavished on his apocalyptic demon. Instead, the figures are seated like a jury, holding numbered cards identifying them as defendants. In the April 30, 1946, issue of Look magazine, Biddle wrote, “Viewed together, they are less imposing than an average, small-town men’s club …Yet the brutal traits of these Nazi leaders show up under individual analysis.”

The exhibition showcases recent gifts to the museum by the Michael Biddle family and was organized by Woodmere CEO William Valerio, who in a video introducing Biddle says, “He was a politically engaged artist of great delicacy who often used social satire to undermine injustice.”

Though Biddle’s subject matter was sharply observed, it wasn’t always grim. “He was a tremendous traveler …” son Michael recalls, “There seemed to be a kind of restlessness about him.” Following World War I, Biddle lived and painted in Tahiti, becoming mesmerized with the tropics. Tahitians (1920) bursts with light and color, from breadfruit and palm leaves carpeting the ground to subjects’ garments.

Whoopee at Sloppy Joe’s (1933), is a glimpse inside a crowded Prohibition-era speakeasy, a collection of caricatures that diverge from Biddle’s representations of real people. The denizens of Sloppy Joe’s are archetypes, from the bartender clutching a silver cocktail shaker, eyes closed, listening to a gabby customer, to the woman down the bar who seems lost. Out on the floor, a large man closes in on a woman in a yellow coat. Each holds a tiny glass, but she’s lifting hers to the light, inspecting the contents. In the foreground, a pair of tuxedoed men with rouged lips sit side by side, looking down prominent noses, across from a young woman in a striped shirt, hiding behind her book and shooting us a questioning glance.

By the time Biddle painted Evocation of the Past (1966), an imaginary assemblage of artists he esteemed, some of the subjects had died, and Sardeau was terminally ill. The icons don’t look thrilled to have been called together. Biddle put himself in the middle, holding palette and brush, one of his many self-portraits on view. Georgia O’Keefe and Charles Demuth are there. So is Man Ray, relaxing on a settee and smoking a pipe—an image Biddle lifted from his 1941 portrait of the artist. Sardeau is in front, looking bored. None of Biddle’s heroes engage; they look like they wish he would release them from his mind’s eye. But then, Biddle could never look away.

All Woodmere galleries are wheelchair-accessible, with the exception of the Dorothy del Bueno balcony. Accessible parking is available near the Widener Studio building, to the right of the museum, separate from the main parking area. Wheelchairs are available on request. For information and additional assistance, call (215) 247-0476 prior to visiting.