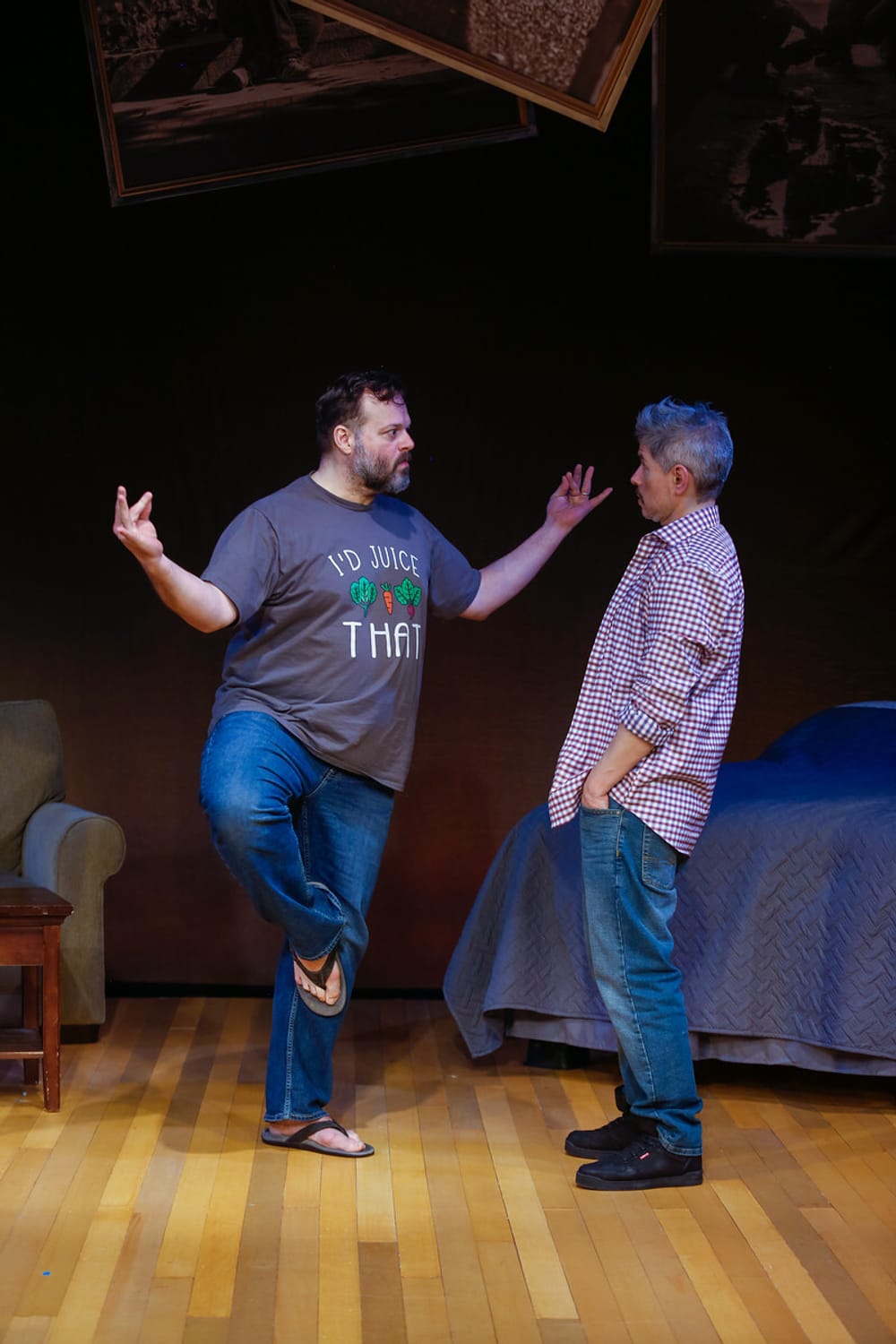 Even mounds of profanity can’t revitalize The Motherf**ker with the Hat, which in this co-production from Theatre Exile and Philly-founded nonprofit the Brothers’ Network becomes an oddly lifeless play stacked with local talent.

Jackie (J Hernandez) has returned home after two years in prison upstate. He is sober, getting his life back together, and trying to make things right with his childhood girlfriend, Veronica (Daniela Malavé). Things are looking up, until one day he notices a strange hat in his apartment and accuses Veronica of cheating on him in their bed.

From there, we meet Jackie’s support network: his preachy, slick AA sponsor Ralph (Scott Greer), Ralph’s beleaguered wife Victoria (Amanda Schoonover), and his cousin Julio (Zach Valdez). Each character appears to support Jackie through this time, and provide some of their own hard-won advice. What begins as a comedy about infidelity and trust becomes a darker examination of addiction, friendship, morality, and violence.

That is a lot for one production to handle. When it opened on Broadway in 2011, The Motherf**ker with the Hat was praised as a sharp-tongued comedy; its much-lauded playwright, Stephen Adly Guirgis, went on to win a 2015 Pulitzer for his Between Riverside and Crazy.

But Theatre Exile’s production is halting and deeply confused. Some scenes stop before we reach satisfying conclusions, while others drag on. The characters, who all skew morally ambivalent, are grating and unsympathetic.

This is a shame, because the entire company puts in a gallant effort to make these characters human. Hernandez carries the play with charisma and tenacity. Greer plays Ralph as a broken man who has funneled his alcohol addiction into manipulating his close friends to satisfy his needs. But while the performances are praiseworthy, they are not particularly enjoyable to watch. The dialogue becomes tedious and jokes fall flat. Valdez’s Julio is the exception—he revels in his character’s idiosyncratic sexuality and off-putting social demeanor. He is an odd duck for whom the audience roots.

In his program note, director Ozzie Jones shares that due to health issues arising just as the production began rehearsal, he directed on Zoom from a hospital. This might explain the show’s lack of focus.

One directorial choice strikes me as particularly egregious: Jones changes the setting from New York City to Philadelphia to make it more relevant to local audiences. Photos of Kensington residents (by Shawn Reid) hang above Colin McIlvaine’s set (a singular drab apartment that is supposed to stand in for three separate residences). Dramaturgically, this switch makes no sense, as the characters talk about Columbia University, Grand Concourse, Ocean Parkway, and taking the train to surf at the beach every morning.

Philadelphians will accept a lot, but to represent one of Philadelphia’s most dynamic and historically complicated neighborhoods with such little regard for specificity is pretty f**ked up.

Know before you go: The Motherf**cker with the Hat contains drug use, violence, and frequent and extreme profanity, and is intended for mature audiences.

Theatre Exile is a fully vaccinated workplace. Audience members must provide proof of full Covid-19 vaccination to attend a performance, and masks must be worn inside the building at all times. Capacity has been reduced for this production to accommodate distanced seating.

Theatre Exile is an ADA-compliant venue with all-gender restrooms.