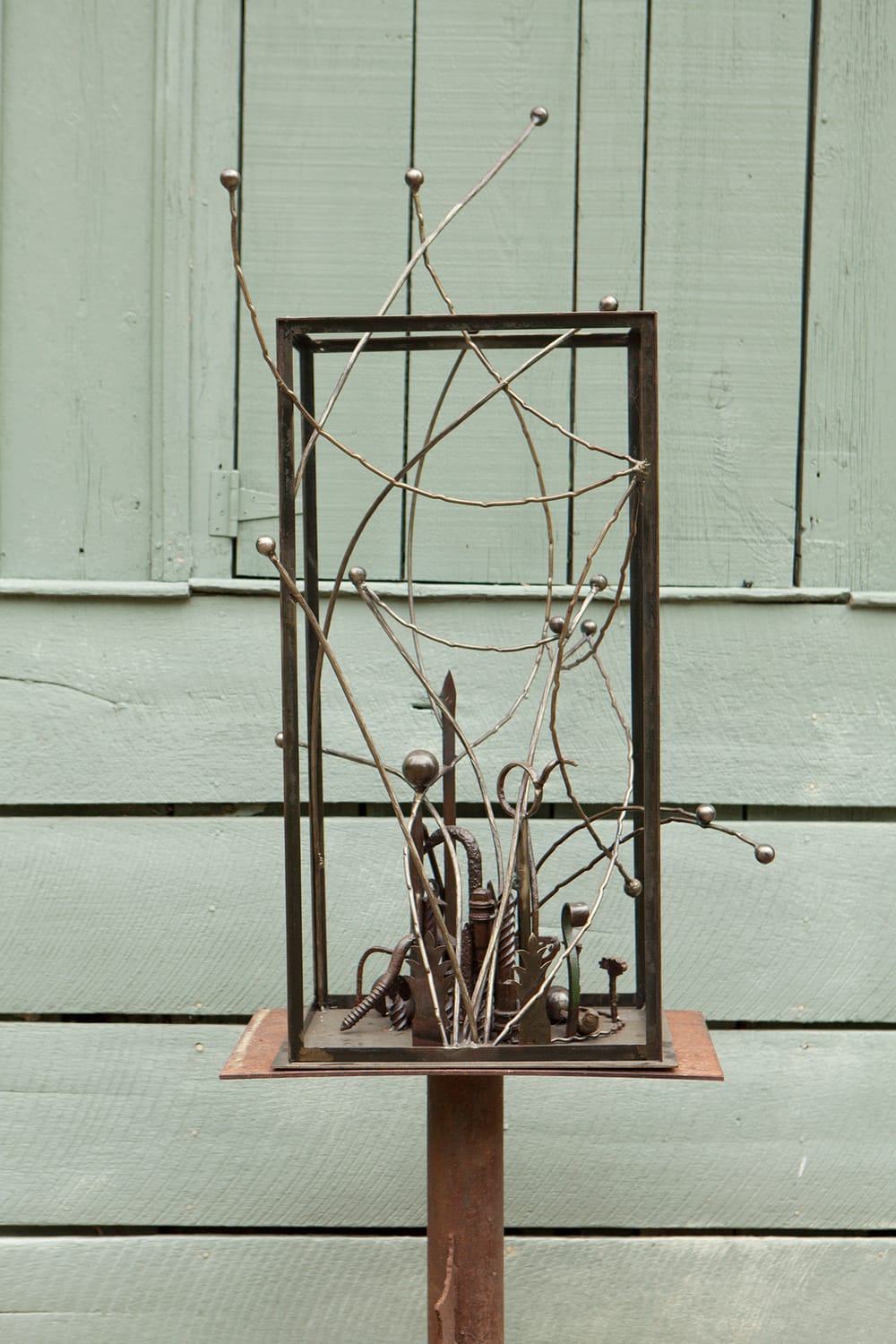 The artist’s voluptuous hand is joyfully apparent throughout the intimate, mighty, and aptly titled exhibition Stan Smokler: Steel in Flux at the Delaware Art Museum.

Stan Smokler’s works are on view both inside the museum and outside in the Copeland Sculpture Garden. Indoors, Smokler’s ineluctably moving sculptures, gathered by Margaret Winslow, the museum’s newly appointed chief curator, are beautifully installed in a small, bright first-floor gallery. Here, 29 works of varying sizes—ranging (as wall text says) from “geometric to organic, whimsical to the celestial”—are artfully meshed into a galvanizing exhibition.

A palette of detritus

Smokler (b. 1944) works exclusively with found objects, inspired by the detritus he’s sourced and stockpiled all his life. At the exhibition’s entry is a revealing 30-minute video covering the New York native’s career, from his early work in a Gowanus (Brooklyn) foundry to the creations emanating from his current Marshall Bridge Studio in bucolic Chester County where he moved in 1999. In the film, Smokler’s wife Madeline Lewis recounts that their first date was a visit to a huge New York City scrapyard, where they climbed a mountain of junk that was “the equivalent of a painter’s palette.”

Often, works assembled from found objects have a rough, unfinished quality reflecting the humble origins of their sourced components. But this artist’s modernist abstractions are enormously polished, elegant, and refined. Though it’s often possible to pinpoint his materials, Smokler transforms them with an impressive combination of artistry, craft, humanity, and wit. For instance, though you can identify the rebar used in Construction 1954 (2002), it’s manipulated so skillfully as to seem chased or modeled.

Smokler explores even serious subject matter to create multiple levels of emotional meaning. Black Hole (2010) takes a massive, disturbing astronomical concept and interlaces it with spider-weblike lines to create a paradoxical work that is not only thought-provoking but also oddly embracing. And in 2015’s Hieronymus Bosch: Garden of Earthly Delights—an exhibition highlight—the artist’s interpretation of that grim painting results in a playful construction that also seems to sparkle and dance. Almost universally, the artist’s sculptures evidence his deeply felt desire to connect material with subject, buoyed by a generosity of spirit that is lauded by colleagues and collectors alike.

Smokler’s pieces are so inviting and seductive that you are immediately drawn to them, not a typical response to steel, that generally intractable material. Here, the ubiquitous museum signage saying “Please do not touch the artwork” has never seemed so necessary. The urge to put your hands on these enormously tactile works is almost overwhelming.

A mini treasure hunt in the Sculpture Garden unearths four outdoor works. Three are on view through the end of October, but the elegant eight-foot-tall Circle of Lines (2011), a gift from the artist, is in the museum’s permanent collection.

Back inside, works in the gallery are on loan from the artist or collectors, along with six appealing mixed-media drawings that march along the museum’s second-floor hallway. Some artists working in three dimensions begin on paper with preparatory drawings, but Smokler works directly with his materials, ensuring the immediacy and intimacy of his sculptures and creating his drawings after the fact as an almost whimsical record.

Smokler has exhibited successfully and widely throughout his 40-plus-year career, but—inspired by an influential early workshop he took with famous sculptor Sir Anthony Caro—he has also been a supportive and committed mentor to a generation of artists, both at Delaware College of Art and Design (1998-2016) and in his welding workshops at Marshall Bridge, established in 2004. As well as the video, an informative illustrated pamphlet accompanies this beautiful, not-to-be-missed exhibition, part of the museum’s Distinguished Artist series celebrating those who have impacted contemporary art in the Greater Brandywine Valley.

Masks are optional inside the museum and required in the auditorium, on tours, and in studio classes.

Ballet for the future

Quintessential American stories on loan from Bank of America