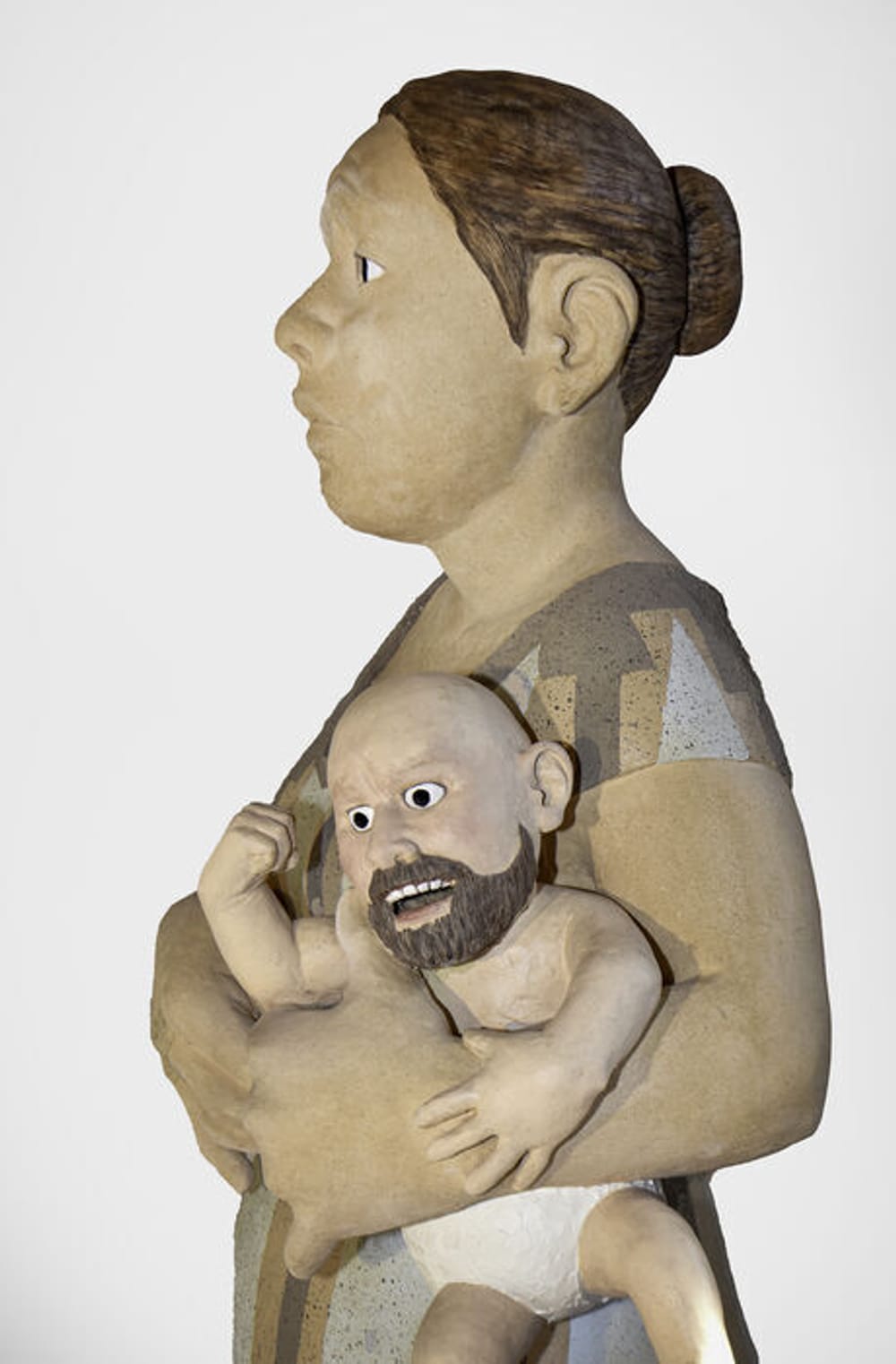 In a sense, every work of art is a reflection of the person creating it. In Figuring Space, the Clay Studio gathers figurative sculpture by artists practicing in the United States to assemble a mosaic of imagination that reflects the diversity of those creating art in America.

Lugo’s practice blends urban graffiti with traditional symbols of the decorative arts. In The Talented Mr. Trotter: You Can Be Anything (2022), Trotter’s visage appears on a porcelain urn. Often, the face Lugo features is his own. “I put my face on pots,” he has said, “because I want to put my face in a place where it doesn’t belong. I want you to get used to it. A hundred years from now I want there to be a lot of people of color on pots, so you can see it every day and become comfortable with it.”

“I can see the life”

Even if you’re alone in the gallery, you’ll feel in good company. Step in and meet the barefoot girl lying on a cot and breathing her soul into the harmonica she delicately holds to her lips. Tip Toland wasn’t sure who she was sculpting until Russia started a war last winter, and Love Song for Ukraine (2022) was born.

Clad in summer clothes, legs folded, and eyes closed, the girl is exquisitely lifelike and evocative, a hallmark of Toland’s figurative works. The Philadelphia-born artist, now based in Seattle, often uses herself as a model, and says she knows a sculpture will work when she finds the gesture, the expression, to animate the clay. “I get the feeling that this character is actually going to live … I can see the life.”

Across the gallery, another young woman, deep in thought, gazes ahead, as if into a mirror. Cristina Córdova’s model for Eva XV (2022) was her daughter, whom she often sculpts, but subjects are only part of the artist’s intention. When we see figurative work, “it’s really easy to get caught up,” the North Carolina-based sculptor commented in a Ways We Work interview. “The content is less in the imagery of the figure, and maybe more in the treatment of the material, or at least equally considered in my mind.” Eva, for example, wears a shirt embossed with De Monte y Mar (From Mountain and Sea), a reference to places in Córdova’s native Puerto Rico where she obtained the sculpture’s natural pigments.

Not far from Eva, Roxanne Swentzell’s large woman looks perplexed. In Put Down the Man Baby (2022), she holds a struggling creature with the wriggling body of an infant and bearded face of an infuriated man. She’d like to relieve herself of this burden, but hesitates.

Swentzell, from a family of Native American potters and sculptors, lives in Santa Clara Pueblo, New Mexico. Her practice is aimed at balancing power between women and men, something accepted in Native culture, and she uses female figures to explore the human spirit. In gallery notes, Swentzell says the Man Baby is “upset with never having had to take responsibility … She’s been holding it for him, never allowing him to grow up.” The artist turns the question to viewers: “Who is your Man Baby you’ve been holding, catering to, protecting?”

Across the room, another tantrum is taking place in Kyungmin Park’s How Have You Been? Introspection (2022), a sundae of internal angst. Park frequently depicts adults’ lingering remnants of childhood emotion, and says Introspection represents feelings she experienced during the pandemic. The sculpture is a tower of disturbed thought bubbles erupting from a troubled sleeper’s mind. Vividly colored scoops rise into a surrealistic dreamscape topped by the head of a toddler in mid-meltdown, face clenched in fury, pigtails flying, and tongue sticking out in a scream you’ll be glad you can’t hear. After the last three years, who can’t relate?

In the exhibit, curated by Kelli Morgan, professor of practice and director of cultural studies at Tufts University, and Jennifer Zwilling, curator and director of artistic programming for the Clay Studio, some works portray whole worlds.

Sergei Isupov’s On the Way (2020) is a non-linear novella in painted ceramic. On the colorful front, a runner with flaming hair is pursued by a little dog nipping at her shorts. Fleeing, she bumps a sidewalk café table, but the amorous couple sitting there barely notices. On the reverse side, colors drain to sepia tones and the scene shifts to a family who appears to be leaving home. Mother has a sack slung over her shoulder, and the child rides on the back of the father, who wears a suit and athletic shoes. Isupov understands relocation: born in Russia, he was educated in Ukraine and Estonia when they were part of the USSR. He later emigrated to the United States, and now works in Massachusetts and Estonia.

The sculptures of Jonathan Christensen Caballero, originally from Utah and now an artist in residence at University of Kansas, pay homage to laborers like his parents, particularly Latin American workers (his mother immigrated from Panama). In Seeds of Tomorrow (Semillas de Mañana) (2022), he recalls vegetable gardens grown by Mexican workers who came to Kansas in the 19th century to build the Santa Fe Railroad.

“The figures reveal people who contribute to society by enduring labors which often sacrifice their health and safety,” Caballero observes. “It’s a moral imperative for Latin Americans to be celebrated as part of the fabric of US society.” Beyond vegetables, Caballero’s title references familial and cultural roots immigrants cultivate here, and their contributions to American identity.

Speaking of her technique on PBS’s Craft in America, Córdova said, “I need to draw out of the clay a sense of presence.” Which is what Figuring Space does. The exhibit has drawn, from artists of disparate backgrounds and perspectives, a national sense of presence, and a more accurate reflection of the country we are, and are becoming.

Masks are not required.

The Clay Studio provides assistive doors at the entrance and elevator access to all floors.