Taller Puertorriqueño, a Latino arts and culture center located in North Philadelphia, is gearing up for construction on a new home: El Corazón Cultural Center.

Originally founded in 1974, Taller uses its programming to bridge Latino, African, Caribbean, and European cultures. Merging arts and culture with the values of human rights and advocacy, Taller creates programming at the forefront of social change.

As the executive director, Carmen Febo-San Miguel said this is a historic project. Taller Puertorriqueño originally started at a small storefront on 5th Street and later had to expand to two buildings, because one building did not provide the space needed for growing programs.

Ten years in the making

The idea for El Corazón Cultural Center originally started 10 years ago, when the organization began figuring out how much more space they would need for future programming. One of the first grants for this project was awarded to Taller Puertorriqueño in 2007: $1.5 million from the City. The state also approved redevelopment assistance grants for the project over two legislative periods, in 2004 and 2007. Taller was more recently involved in a capital campaign, raising an additional $900,000.

The new center will rise from a parking lot, already used for various outdoor events and performances, across the street from Taller’s current education building at 2557 N. 5th Street. The space was allocated to Taller in 2007, when City Council promised the land to the organization.

Once the building is complete, projected to be one year from the start of construction, Taller will expand upon its current arts and cultural programs. The center will also offer rental opportunities for meeting spaces, festivities, and more to community groups, corporations, and families. There will also be a café leased by an outside vendor. (For a video of the groundbreaking, click here.)

Taller closed the deal in the last week of October, and construction for the new building should begin promptly after this. One of Taller’s current buildings has already been sold, and the other is on sale. 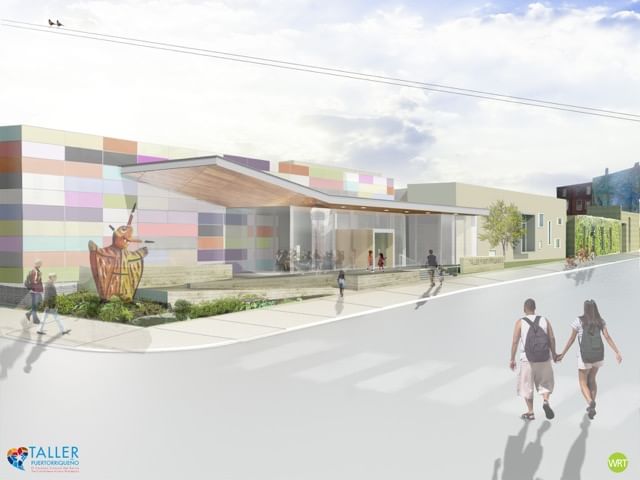 Febo-San Miguel explained that through the opening of El Corazón Cultural Center, all programs are positioned to grow. There will be more spaces to serve youth in after-school programs, the gallery will be larger, and there will be a bigger theater that will accommodate 200 people: It will be a new state-of-the-art center, which will serve as a magnet not only for new audiences, but also for new businesses.

“This new center is the largest endeavor that Taller has taken. It will mean increased visibility. This is the largest Latino and Puerto Rican-focused center in this region, not just in the state,” she added. The organization hopes it will jump-start the growth of many local commercial and cultural activities.

“I would encourage people to stay connected; to find out more, to continue to contribute to this effort. This has been a long-term effort and it’s only been possible with support from every sector in the community, from government to corporate to community to individuals,” Febo-San Miguel said.

You can follow the progress of El Corazón Cultural Center online. In the meantime, Taller Puertorriqueño encourages folks to help as volunteers, through promotion, attending events, and of course, donating.

At right: a rendering of the new center. Image courtesy of Taller Puertorriqueño.