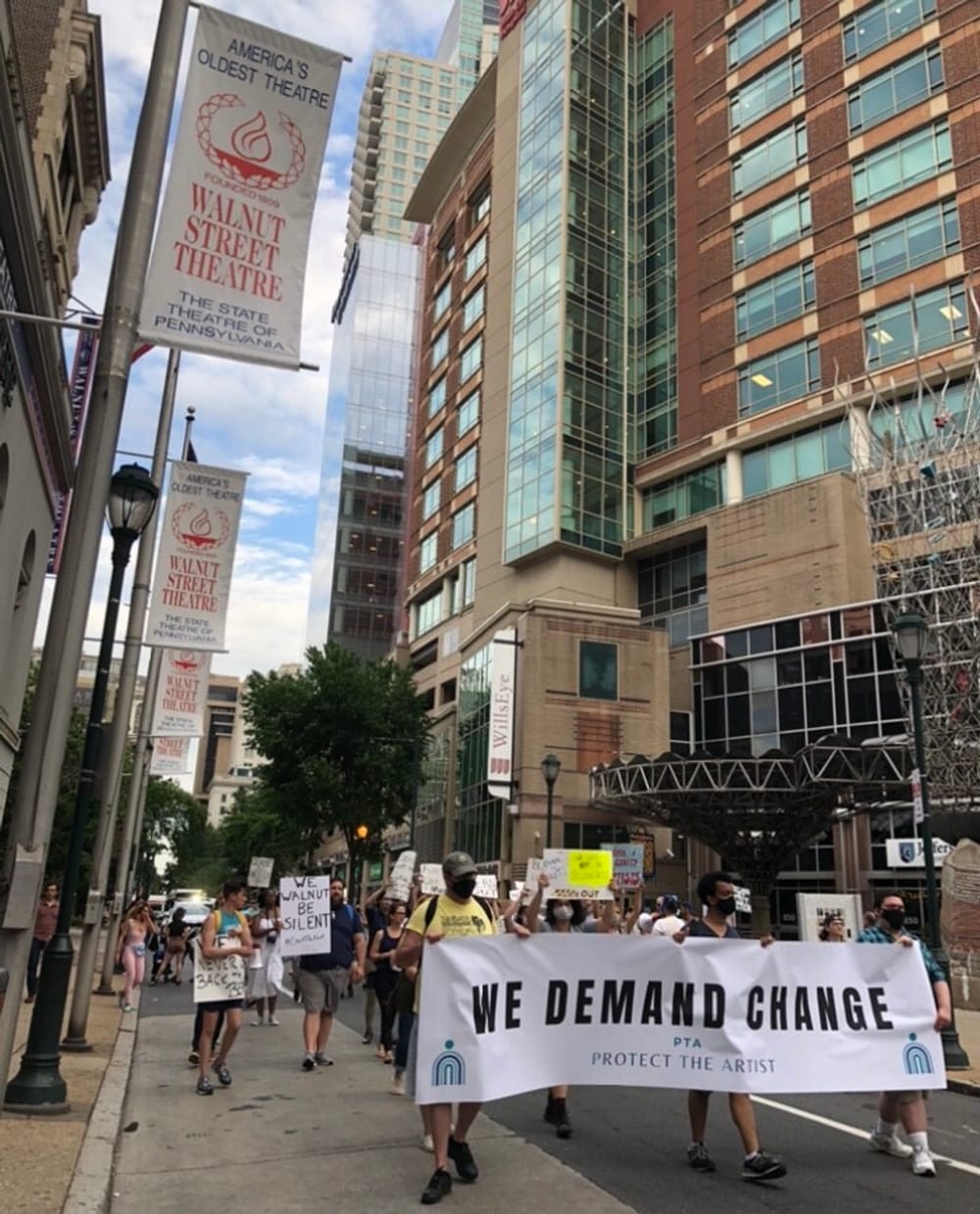 Back on October 7, 2021, Protect the Artist Philly (PTAP), a group comprised of former WST employees and other theater-affiliated artists, planted their bullhorns and placards across the street from the company’s front doors. It was opening night, and the Walnut’s only apparent response was to plant a hired Mummers string band at the entrance to drown them out.

But five days later, the company closed its offices for several hours and brought in a speaker for, it proclaimed on Facebook, “employees, Board [sic] members, and artists to learn about, discuss, and celebrate diversity, equity, and inclusion.”

“At least there’ll be lunch”

WST hired Dr. Brandi Baldwin (speaking fee: $10,000 minimum) for this celebration. If Baldwin’s name sounds familiar, that’s because in March 2021, she held a DEI session at the Free Library of Philadelphia that left employees furious. Afterward, Guy Sims, the library’s brand-new chief diversity and inclusion officer, told the Philadelphia Inquirer, “the facilitator offered perspectives that did not reflect the direction we should be headed as an organization.”

A WST employee who spoke to BSR on condition of anonymity said of the booking, “A lot of us had questions, especially when we saw who was leading it. We posed those questions to upper management and they went ignored.”

Despite the Walnut’s claim that it had planned the workshop for a year, another anonymous WST employee said, “We didn’t get a lot of notice … It was clear my supervisors weren’t looking forward to it. They said, ‘We have to go, but at least there’ll be lunch,’ and ‘No one wants to go.’”

"Not my skill set"

These sources, both people of color, said they’ve encountered discrimination at the theater. One explained, “Reverse racism exists at that office, but racism doesn’t. When I asked about the protests and PTAP’s demands, I was told it was all about [WST president and producing artistic director] Bernard Havard’s salary. Issues of racism and sexual misconduct weren’t mentioned. It was just, ‘They’re crazy.’”

But the other source recalled a fancy staff luncheon with Havard for new apprentices:

“The first thing out of his mouth was explaining why there are no Black people on the board. He said he tried but they don’t want to be on the board, so he stopped trying. I was stunned and wondered why that was what he chose to open with.”

“Another time, a casting director was directing me in a musical and asked, ‘Can you just turn this song into a rap?’ I’m not a rapper, that’s not my skill set,” the employee continued.

Both sources feel that PTAP’s demands, which include an anti-racism plan, more diversity on and offstage, and board restructuring, are fair and appropriate. One went a step further: “After that workshop, [PTAP] was the first place I went.”

Actor Sean Thompson, who most recently appeared as Prince Eric in the company’s Covid-shortened production of The Little Mermaid, offered a different perspective.

“I haven’t encountered issues like discrimination,” said the Mayfair native, who’s worked at the theater on and off for 15 years since he started there as a bartender. “It was $25 per show, and to me that was an apprenticeship. It got my foot in the door. I don’t see that as [pay] disparity as much as a course of upward mobility.”

As for PTAP, Thompson said, “I’m an artist and I don’t feel protected by them. I don’t know what their demands are. It seems a little muddy to me.” Further, he said the group’s opening-night protest “seemed like an attack on the celebration of six ladies opening their show, half of them women of color. They felt scared for their safety.” He added that none of the women expressed these fears to him directly.

While Baldwin’s session was Thompson’s first in-person diversity training (he previously did one online through Actor's Equity Association), he said he was “super affected” by George Floyd’s murder in 2020 and wanted to know “how I could do better as a white person.” He said he found Baldwin “so lovely,” and “fun,” opening with jokes about herself before moving into the tougher stuff.

But some found the approach alienating. Both anonymous sources for this article have attended multiple DEI trainings. Neither, however, had seen one conducted quite like the Walnut’s.

“I think she was making these jokes to be self-deprecating but they related back to stereotypes,” said one of the employees. “The Walnut is mostly white, so the audience was mostly white, and I saw my supervisors laughing. It was uncomfortable for me, yet that made them relax.”

The attendee recalls one moment that particularly stung. When Baldwin described correcting her son for using the word ain’t, “it felt almost like a minstrel show, and I felt very bad for thinking that. It was like her target audience didn’t include me; it was for my white supervisors.”

When an audience member asked Baldwin to use gender-neutral pronouns, Thompson found her response—give people time to hear requests and adjust their worldviews—helpful because “it didn’t feel like that one thing must happen or else.” Which is not the message the two anonymous sources had hoped for.

One explains, “She said, ‘Unconscious bias isn’t real; some biases are just natural preferences. … She actively misgendered people, never asked for pronouns, made assumptions, and got defensive when someone pointed it out. For a DEI professional to be doing that was very weird.”

Like Baldwin, Laura Hinds, a Philly-based public speaker and educator who focuses on trauma and racial equity, conducts DEI workshops. But while Baldwin seems to prioritize her audience’s comfort, Hinds described a different approach.

“It’s not about shame, it’s about where we’re committed to go,” she added.

In this case, “we,” depends on where you’re sitting. “I believe the work is an individual and private task,” Thompson said. His colleagues who spoke with BSR disagree.

“We never once discussed what this theater is experiencing and why,” one explained of the session’s failure to address institutional change. When Baldwin asked attendees why they were there, and what they wanted to learn, “I remember thinking, ‘I’m here because I want to know what the Walnut is working on regarding DEI, and by the end, it was clear they weren’t. [Baldwin’s] goal was for us to become individually more comfortable with these conversations. It wasn’t about the organization.”

The source said his response, “Well, it’s not a quick answer. There are a lot of moving parts,” elicited groans. Someone spoke up, answering that yes, the quick answer is that it is a white institution. Baldwin jumped in, declaring that there are more types of diversity than racial diversity.

The source was also disturbed by a Walnut supervisor’s suggestion that anyone who has an issue should speak to Sylvester directly. Sylvester seconded the idea, and touted his and Havard’s “open door policy.”

Despite this stated policy, neither employee of color wished to use their names here, not only because they feared backlash from the Walnut, but also because of the company’s outsized influence on the theater community in Philadelphia and elsewhere. “I’ve seen actors and teaching artists who raised concerns,” the source said, “and have heard that those people cannot be hired back.”

Hinds likewise took issue with the open door claim. “It’s unrealistic to expect workers to speak out, considering the lack of power they have in relation to their supervisors.”

No time to stop the work

One of our sources was asked to clock in and get back to work before the end of Baldwin’s presentation. The other said it felt like a “slap in the face,” particularly once the theater publicized the event on Facebook, but turned off comments on the post. The “open door” slammed shut.

Our sources at the theater said there has been no DEI follow-up since October, although one said, “I did hear about an anonymous suggestion box in the green room, though I never saw it nor was encouraged by anyone on staff to contribute to it.”

Despite repeated requests for comment, Baldwin said only, “We do not speak with journalists regarding our private client engagements.”

After Baldwin’s workshop, one employee of color quit working at the company altogether. “I think it has affected my professional outlook,” the source said. “I’ve been in theater since I was a kid … but I’m wondering, is this what it’s always going to be? Is there a place for me?”

As Hinds noted, “It sounds like harm was done at the Walnut Street Theatre, and they entered this work to repair history, not to cause more pain.”

“Something very deep that I carry is that groups not tap out,” Hinds added of her own trainings. “Everything’s hard in the beginning. We haven’t developed the muscles to sit in the tension and find the joining together, and we’re likely to stop the work. That’s untenable to me.”

The Walnut did not respond to repeated requests for comment on this story.

As fights for fair labor continue, Waiting For Lefty is a timely revival at Quintessence Theatre Group

“A story that needs to be told”