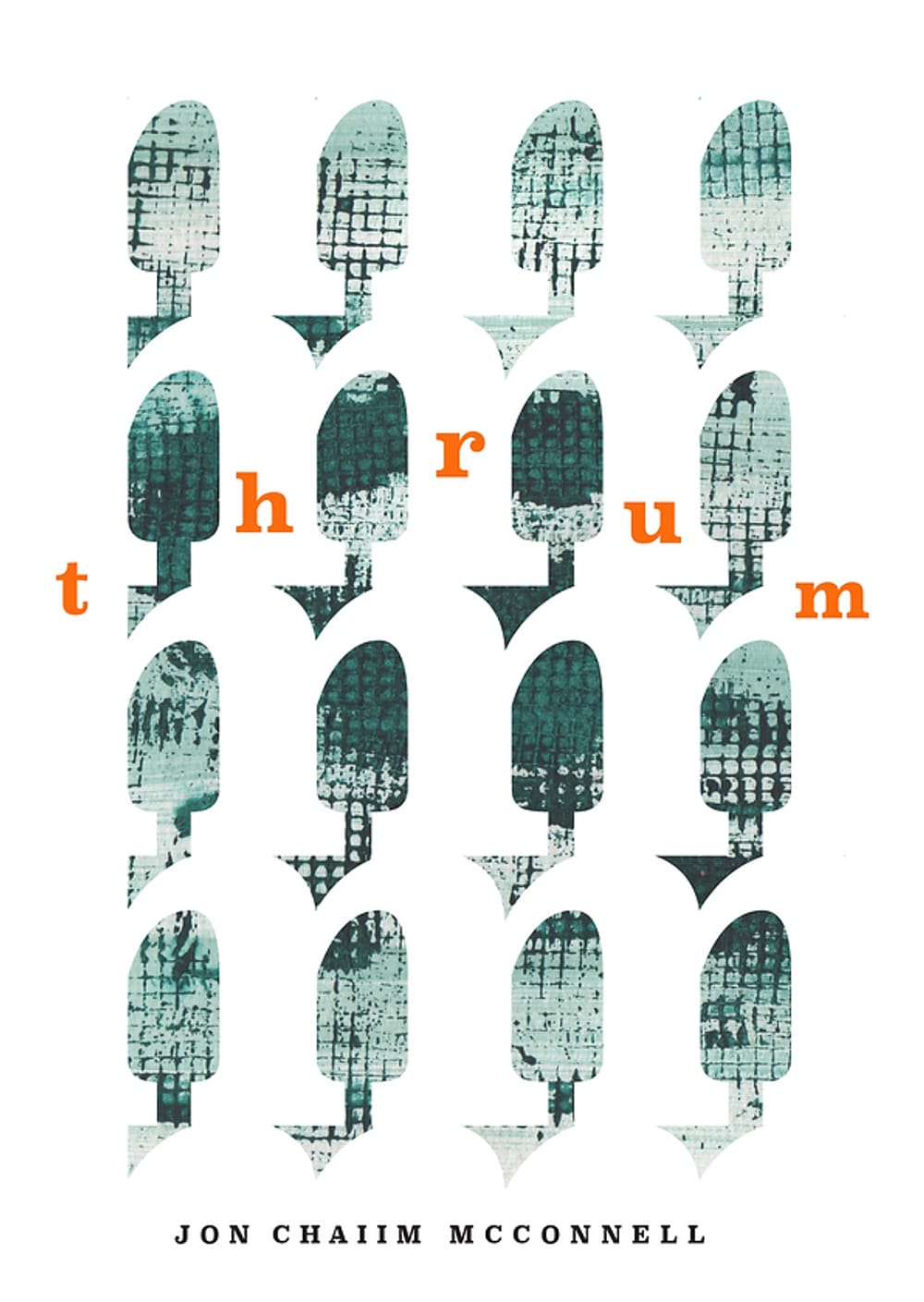 thrum is a speculative novella by Delaware-based author Jon Chaiim McConnell. Concise, precise, and propulsive, it’s a controlled detonation of a debut, set in a dystopia with a devastating dependence on liquid electricity (i.e., the titular “thrum”). Throughout, McConnell’s prose charges this rapidly dwindling substance—not to mention the volatile world that it powers—with uncanny political currency.

Gwendolyn, who lives with her daughter’s family in a nondescript suburb, is the heartbeat of the novella, which was published by the Philly-based press Eye Cult Attic in 2021. Her job involves distributing electricity vouchers to households that have been deprived of power—or worse—by the thrum’s periodic “surges.” With her government-issued clipboard and functionally meaningless vouchers, Gwendy is all too aware that “she is immediately the embodiment of a disaster [that] does not feel real to anyone until they open the door to find her there.” Her story takes off when she is hand-picked to join a government research team dedicated to better understanding the thrum. Whether it’s a genuine promotion or mere manipulation, Gwendy—and by extension, the reader—begins to be entranced by the unnatural powers of this supposedly natural resource.

As Gwendy inches ever closer to the thrum’s mystery, other characters are determined to get as far away as possible. The second of the novella’s three interwoven plotlines opens on the explosion of a “greater spire,” the city’s last-ditch effort to capture and contain the thrum. This spectacular failure is the surge that snaps the camel’s back for one family, only ever referred to as “the man,” “his wife,” and “his daughter.” thrum follows their flight from civilization as they stake their claim deep in the wilderness among other like-minded “escapees”: “the kind of hard journeying that’s only ever sounded recreational to the man, before.” In a remote setting that gives new meaning to the phrase “off the grid,” the man spends his time trying to keep the makeshift society’s energy wells, along with his diminished role in the family hierarchy, from crumbling.

While Gwendy’s and the family’s stories fuse the dystopian and the domestic in fairly straightforward fashion, it’s the honed harshness of thrum’s third thread that pushes the novella to a stranger, more insistently terrifying pitch. Here, we encounter what I’ll call a cult of the thrum, whose current-fueled rituals are depicted in sharp, shard-like prose. I loved thrum’s hypnotizing opening sequence:

From the, of the, to the, in the thrum. From without the edifice of the thrum. Unspooling like the soil from the handling of the thrum. She sees a woman reaching hands into the soil and she tastes it for the thrum, chewing grains until they’re small enough to rub into her gums until she smiles since she tastes it…

Throughout, McConnell doesn't allow readers to wrap their heads around the thrum so much as he insistently wraps the thrum around their heads. His choice to render the substance as a liquid only heightens its conceptual slipperiness, as it laps, swirls, soaks, splashes, drools, and overflows the contours of this alien yet oddly familiar world.

Cutting through a crisis-weary world

It’s that same strange fluidity that allows the novella to sustain multiple allegorical meanings over the course of a reading. Most obviously, thrum is addressed from the global climate crisis, with many of its most haunting images depicting scenes of all-too-avoidable disaster. McConnell memorably describes the aftermath of excavation: ghost towns “blighted with current … Sidewalks curled over in long stretches. Old cars fused down to their rims on the main street. Small homes split sidelong with blackened eruption patterns and patched along with 2x4s.”

At the same time, and inevitably, thrum throbs with the energy of a pandemic-weary world that is “fluent with exhaustion.” In one early scene, Gwendy and her neighbors discuss the spread of “the contamination,” the latest surge of which has just been “officially declared semi-permanent.”

thrum is far more than a timely take on contemporary crises. On the one hand, in ways that evoke the feel of today’s disaster-rich news cycle, McConnell creates a high degree of narrative uncertainty by only partially crystallizing the relationships between the various characters and plotlines. On the other hand, the novella draws a slightly blockier line when it comes to politics. Readers should prepare to feel pleasantly challenged.

The definition of “thrum” is "to make a continuous rhythmic humming sound.” Thanks to its intricate structure and incandescent imagery, thrum hums with a rhythm all its own. As Gwendy ventures into the far reaches of her comfort zone, as the man tries and fails to play the hero, and as the cult of the thrum gorges itself to near-oblivion, the novella sounds a siren that cuts through the noise of our crisis-weary world. It’s a ride you won’t be able to step off of for long. And when you do, it’ll be there, in the background—rhythmic, continuous, humming.