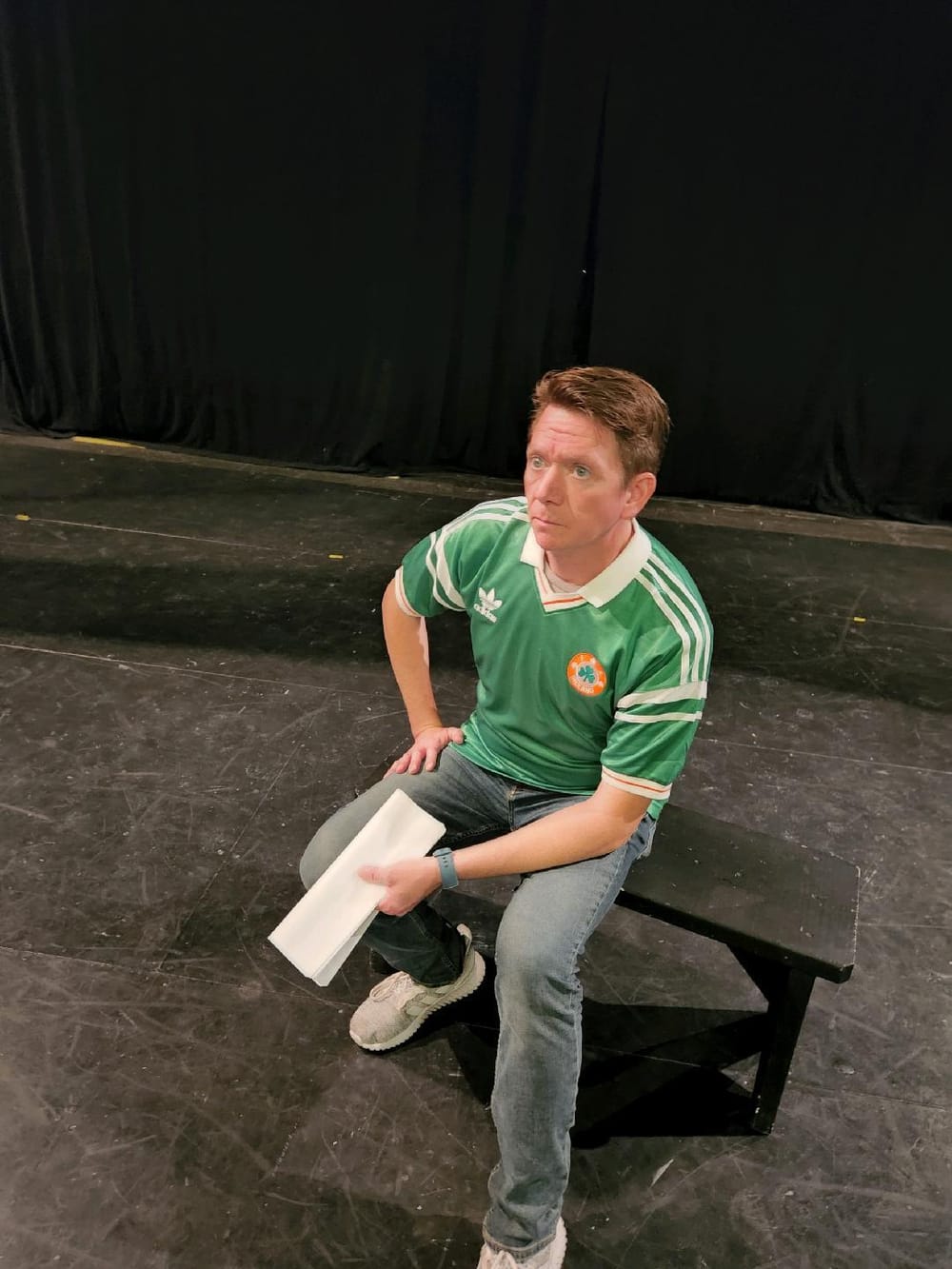 Departures are central to In High Germany and The Parting Glass, a pair of plays by Dermot Bolger that Irish Heritage Theatre is presenting as part of the Philadelphia Fringe Festival. Since these are Irish stories, I mean that in the literal and metaphorical senses.

Each monologue, which runs barely an hour, takes place at a site of travel: a train platform in one, an airport lounge in the other. The small stage on the second floor of Fergie’s Pub has been fitted with the barest markers of scenic design—a few chairs that collectively suggest a bench, a couple signs in German for arrivals and departures.

Eoin (Keith Conallen), a restless and rootless Irishman, occupies the action of both plays, which are set 20 years apart. In theory, the inciting incident for each is soccer, as both plays occur in the aftermath of a consequential match for Ireland. Yet, like so much of that country’s dramatic output, the main driver of the plot tells only half the story. Between warmhearted adulation for The Beautiful Game and technical talk that often went over my head, Bolger refracts the modern history of Irish struggle through Eoin, who comes to represent a lost cohort—caught between the sorrows of the past and the promise of future.

When we first encounter him at the start of In High Germany, Eoin has fled to continental Europe on the promise of increased employment opportunities. He and his buddies, who similarly embrace their wandering status, resign themselves to the fact that they won’t fulfill the ideals of their fathers to become a purely Irish generation. Yet when Eoin returns to his homeland in The Parting Glass—with a German wife and child in tow—he feels alienated in his own country, more immigrant than native.

Soccer—sorry, football—remains the sole source of national pride. Bolger keenly communicates the joys of rooting for the home team, as well as the quiet sadness in tying your identity to a sporting club. He shows, especially through In High Germany, how a connection to a team can buoy lost souls stranded in foreign countries, with language barriers and few friends to keep them going. The attention to detail in his writing is impressively focused, which is complemented by the steady precision of Peggy Mecham’s direction.

Conallen excels at showing the audience every facet of Eoin’s complicated personality. His hardened resignation blooms into tender care as he devotes himself to his German family, only to have his worldview tested once again in a tragic twist. The quick shifts in Conallen’s performance are always believable and sometimes appropriately uncomfortable. Yet, near the end of The Parting Glass, when Eoin has lost so much and has every right to rage at the world, Conallen gives the audience a quiet ray of hope.

Bolger—a revered novelist and playwright in Ireland whose work has not fully penetrated the American market—is a real find. (Irish Heritage Theatre presented his equally affecting The Holy Ground last Fringe.) His work allows for blarney and dark drama in equal measures. But in the hands of Conallen and Mecham, you’re sure to have a good time. Grab a drink from the bar on your way upstairs and join Eoin on the platform, as he waits to get where he’s supposed to be.

In High Germany and The Parting Glass. By Dermot Bolger, directed by Peggy Mecham. $15-$25. Through September 18, 2022, at Fergie’s Pub, 1214 Sansom Street, Philadelphia. irishheritagetheatre.org.

In High Germany and The Parting Glass are performed on alternating nights.

Masks and proof of vaccination are not required.

The performance area at Fergie’s Pub is accessible only by stairs. Patrons must be 21 years of age or older to attend.