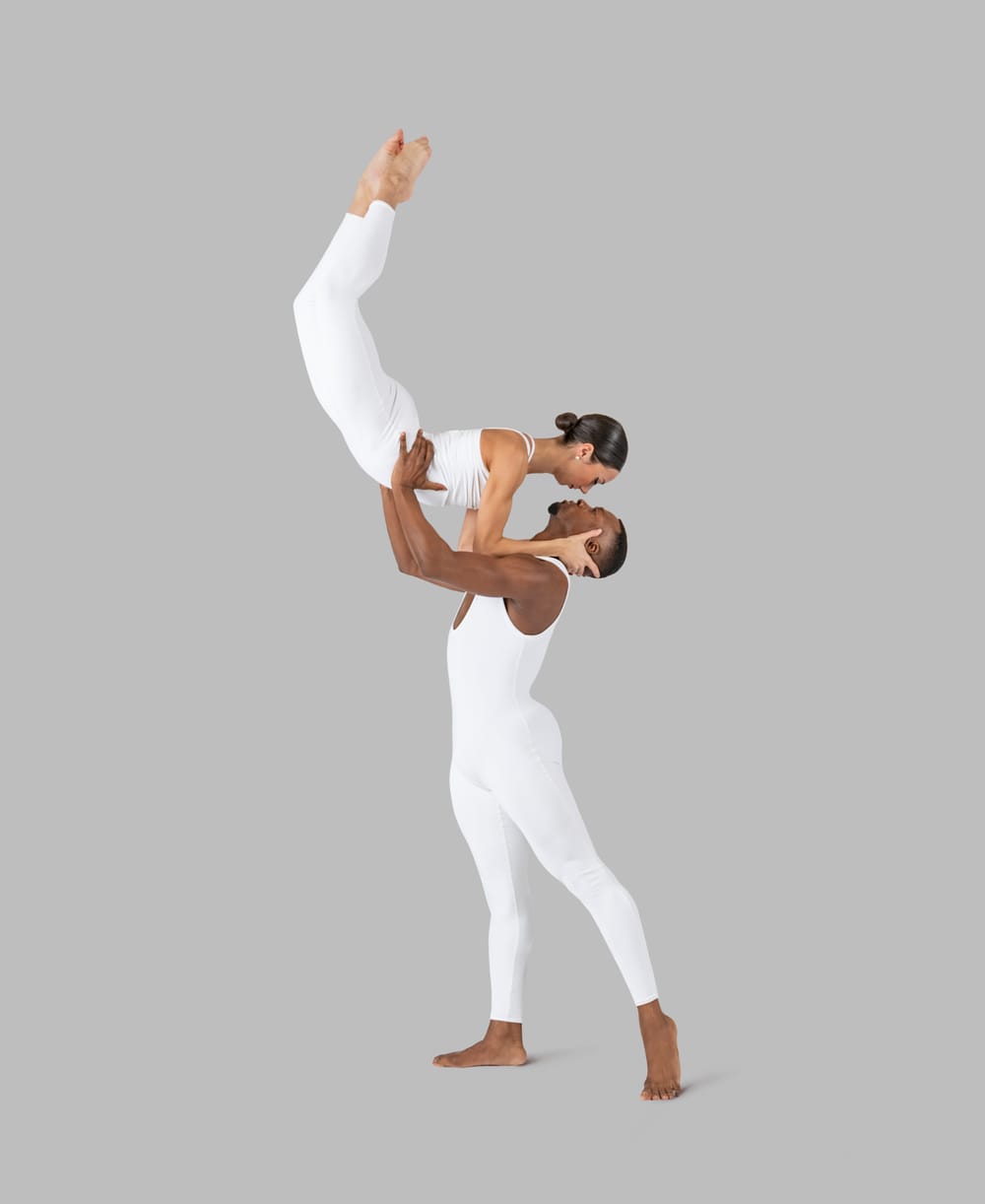 On opening night of last weekend’s PHILADANCO! performance, founder Joan Myers Brown was a bit late for her own show. She was across the street at the Arthaus, receiving the Avenue of the Arts organization’s 3rd annual Visionary Award (BalletX founder Christine Cox was also a recipient). In her remarks after the intermission, Brown reminded us that the company is entering its 52nd year (its 50th anniversary season was interrupted by the pandemic), so it seemed appropriate that the performance, RE (RE-vived and Archived, RE-visited and RE-constructed) looked back at some of the repertoire that helps to define the company’s vision.

Recently, former PHILADANCO! dancer Tommie-Waheed Evans reminded me how strong the company’s male dancers have to be: “a woman [is] flying at you at the speed of light, and you have to catch her, put her down, and then move on to other choreography.” Nothing defines the company more than that power and speed, and the dancers brought their trademark energy to Ray Mercer’s Guess Who’s Coming to Dinner and Ulysses Dove’s Bad Blood.

The Mercer piece was set over, under, and around a tall central table. The dancers, in costume designer Natalie Sanabria’s dark red short skirts for the women and cropped hoodies for the men, performed solos and even duets on the top, and women leapt into the arms of the men on the floor below in a brash display of strength and trust. Clarricia Golden’s poignant solo, performed mostly under the table with her legs often splayed and her feet turned up, balanced the frenetic energy of the piece. She might have been the child at the dinner, left to her own devices as the adults played out their social dramas above her.

My favorite piece of the night, Dove’s Bad Blood, was created in 1984 and reconstructed for the company in 2014. It opened with a solo by Jameel Hendricks in a white unitard (costume design by Carol Vollet Kingston). Hendricks’s dancing was tense, muscles contracted like a tamped-down explosion that erupted when seven dancers entered the stage throwing punches, the women leaping into the arms and onto the shoulders of their partners and slowing it down for a liquid glide of a hand on a hip, a waist. The music, “Excellent Birds” and “Gravity’s Angel” by Peter Gabriel and Laurie Anderson, wove ethereal threads of connection while driving a propulsive sensuality steeped in anger in the choreography. The AIDS epidemic was new in 1984, and spreading; Dove himself died of the disease in 1996, and the title Bad Blood echoes the tragic ambivalence of relationships in the piece.

If Dinner presented a contentious family, Jawole Willa Jo Zollar’s The Walkin’, Talkin’, Signifying Blues Hips, Lowdown, Throwdown gave us a raucously sexy community of women. The first movement, “Battymoves,” takes its name from the Jamaican slang for a butt. Solo dancer Kaylah Arielle, dressed in a short red top and tiny skirt embroidered with gold, and with a big print medallion, like a shield, on her butt, used her sexuality like a challenge to command the stage.

Then the women of the company, in costume designer Terri Shockley’s bright, Caribbean-print skirts, took over with more hip-swinging, butt-shaking dancing that could almost make you overlook the Afro-Caribbean steps to Junior “Gabu” Wedderburn’s percussive score. Brown brought down the house when she joined the dancers for a few hip swivels of her own. The piece told a story of women using the power of their physicality with humor and sass to command their space in the world. The young woman in the seat next to me had never seen the company before and I asked which was her favorite piece. She picked this one, for the sisterhood, and I had to agree.

Rennie Harris created the original “Wake Up” for the company in 2012. He returned to revisit the piece 10 years later, as he said in a short film clip, to make it more communal. He still took us back to 1968, with the dancers in bell-bottom jeans and big afro hairdos. Guest dancer Lamar Baylor, in checked pants and a brown vest, gave a riveting performance, at one moment tragic, at another full of chest-popping swagger.

The piece opened with bits of a Martin Luther King Jr. speech: “believe in yourself ... nobody else can do this for usb...” On the soundtrack, we heard gunshots. Baylor fell to the stage, and at first the dancers seemed to mourn. Then as the dancing grew more animated around him, he wandered among the company, sometimes like a ghost at the party, other times challenging the men with those impressive chest pops. Ultimately, however, he fell again, leaving us with the reminder of bloodshed on the streets, then and now.

I could have used a change of pace to allay the sometimes break-neck pace of the performance, but it was a full evening of energy and skill and community.

Masks are required at all times inside Kimmel Cultural Campus venues, except when actively consuming food or beverage in designated locations. Prolonged periods of mask removal are not permitted.

All attendees must show proof of full Covid-19 vaccination at the time of entry, with valid photo ID and copy of vaccination card (physical or photo). Children under 5 are no longer required to show a negative PCR test or negative rapid result when accompanied by a fully vaccinated adult.

The Library Company of Philadelphia presents Hearing Voices: Memoirs from the Margins of Mental Health

The age of the asylum

Beethoven in Beijing, by Jennifer Lin

The Philadelphians in China

Woodmere Art Museum presents Hearing the Brush: The Painting and Poetry of Warren and Jane Rohrer

The life and travels of a king—and of Piffaro