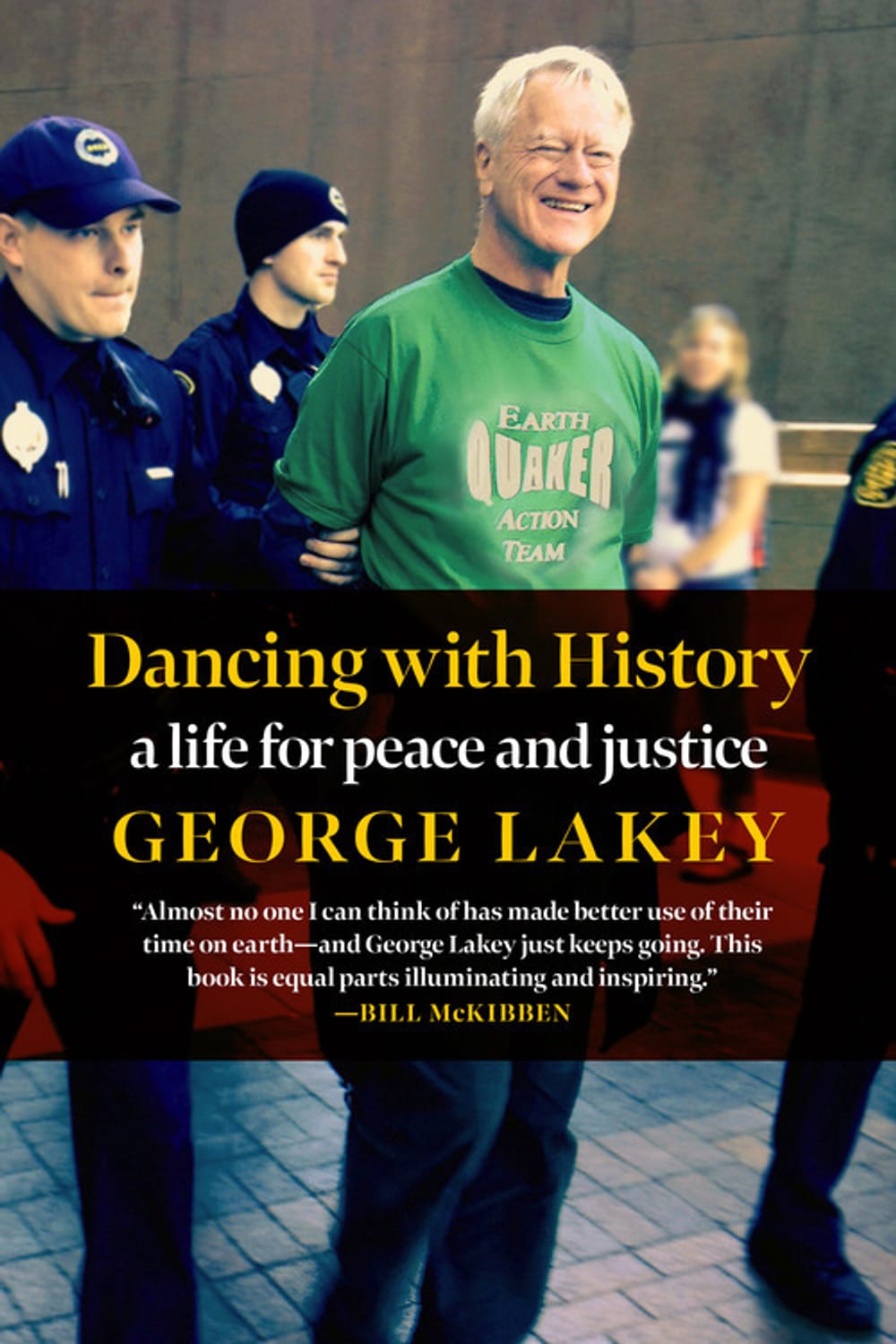 In my social circle, I’m always surprised that so many people know or know of George Lakey—about half of them, it seems, know him for hosting an annual holiday sing-in of Handel’s Messiah, and half know him from his life-long social activism in the Greater Philadelphia area and beyond. He details that work and the life around it in his new memoir, Dancing with History: A Life for Peace and Justice.

I met Lakey in the 1980s, when he was with Jobs with Peace, and we shared office space along with other attorneys and activists. I was soon invited to join in his annual Messiah sing-in when it was still crammed into his communal living room in his West Philadelphia home, and I returned in 2018 for the 50th anniversary sing-in, which was held at the Friends Center, having long previously outgrown that living room. (The back of my head is featured prominently in his book’s photo of that event.)

In his memoir, published at age 85—it’s his 11th book, depending on how you count them—Lakey takes us through his “life for peace and justice,” beginning with his childhood in the working-class shale-mining community of Bangor, Pennsylvania. He describes his formal education: he left West Chester State Teachers College (today, West Chester University) in opposition to the stifling censorship on campus, then finished college at Cheyney State Teachers College (today, Cheyney University of Pennsylvania), the oldest historically Black college in the country. In 1958, Lakey was the only white student living on campus.

He studied sociology in graduate school at the University of Pennsylvania (the notable sociologist Philip Rieff was a mentor), until he realized that his use for sociology was not as a professional field of study leading to an academic appointment, but instead as a means for understanding and planning the processes of nonviolent social change.

Beginning with his arrest during a racial-justice campaign in Chester, Pennsylvania, in 1963, Lakey went on to involvement in other civil-rights campaigns (he co-wrote the 1964 Manual for Direct Action—a seminal work for the civil-rights and anti-war movements) and anti-war efforts during the 1960s (he led Quaker efforts to deliver medical supplies through the naval blockade of Vietnam in the South China Sea). He has championed LGBTQ rights and labor rights issues, and recently he led a Quaker effort for the environment (resulting in his arrest at age 83 during a protest at a Chase Bank, the “number one financier of fossil fuels in the United States.”)

In 2020, as it became clear that President Trump might attempt to remain in office despite the presidential election results, Lakey and others led the Choose Democracy campaign, involving thousands of people in preparations and training to “prevent and, if necessary, stop an undemocratic power grab or coup.” After January 6, 2021, when it became clear that Trump would not remain in power, Choose Democracy shut down, but offered its online resources “to anyone to support pro-Democracy, anti-coup efforts anywhere around the world.”

The “dancing with history” in his memoir’s title, Lakey explains, is his preferred metaphor because:

“It gives considerable weight to history’s drive, but it leaves open the possibility that we, too, might at times move so strongly as to lead history. Further, dancing invites in other dimensions that matter to me—namely, music and spirit. As a young, highly impressionable activist in the civil rights movement, I experienced music mobilizing spirit in ways that spurred action more powerful than I previously imagined possible.”

Ahead of his time

Into this account, Lakey weaves stories of his personal life—his childhood and then adult relationships with his parents, his marriage to Berit Mathiesen in 1960 in her native Norway, the challenges of parenting, and his romantic relationships with other men, such as activist Alan Tuttle.

Reading Dancing with History, one gets a sense that Lakey’s advocacy was often, if not always, ahead of its time. As a 12-year-old in 1949, he gave a sermon on the subject of racial equality to his all-white church congregation. As you might guess, it was not well received. In 1974, Lakey came out as bisexual in a plenary speech delivered at the Friends General Conference Gathering. (As Lakey put it, “It would be a chance to come out to a thousand Quakers, all at once!”) Again, the response was far from enthusiastic. But with these issues, as with many others, Lakey’s dance has him always landing on the right side of history.

Dancing with History: A Life for Peace and Justice. By George Lakey. New York City: Seven Stories Press, December 6, 2022. 424 pages (indexed, including photographs), paperback; $22.95. Get it from Seven Stories Press or bookshop.org.