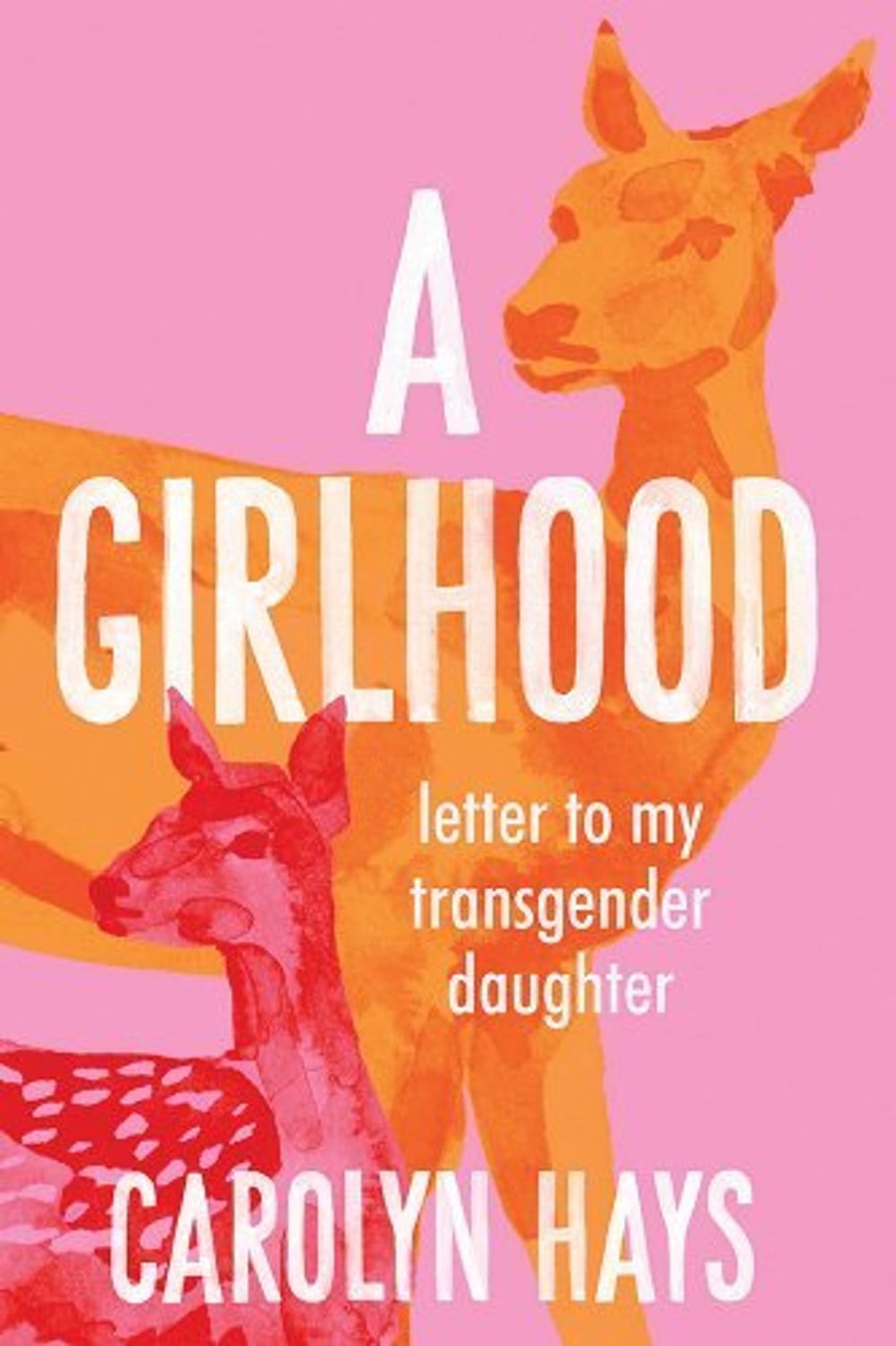 Carolyn Hays’s youngest child was a toddler when she began telling her parents that she was a girl. “He’s in the playroom,” the child heard Hays tell her own mother over the phone, and shouted back, “She’s in the playroom.”

Her conviction held steady: at pre-school, with friends, with her older brothers and sister, in the midst of hand-me-down “boy toys” and a collection of beloved, discarded pocketbooks. One night, in bed, Hays’s husband wondered aloud, “What if this kid learned to talk just to let us know that we’ve gotten it wrong?”

In A Girlhood: Letter to My Transgender Daughter, a tender, inquisitive, humble, and heartbreaking memoir, Hays gets it right—that is, she anchors herself in the foundational imperatives of parenting: to love the child you have, to listen well to that child, to raise them with ferocity and joy.

And to protect them, as much as protection is possible in a world that can be brutal to those who flout the norm.

At the story’s start, the family is living in the Bible Belt, an unnamed state Hays describes as unapologetically red, with Republican-appointed judges. Still, she was stunned one day by a knock at the door: a man from the Department of Children and Families. Someone had made an anonymous call about the family, claiming they were dressing their toddler son in girl clothes and “forcing [the] child to be a homosexual.”

That knock, and the investigation that ensued, cleaved the family’s life into “before” and “after,” chilling Hays and her husband with awareness of the stakes that they, and their daughter, actually faced.

“We were going to be the best parents of a transgender child in modern history: loud and proud,” she writes. But that knock—the realization that they could lose custody, that they could lose their daughter permanently—shook their resolve. “As soon as I felt we were in danger, I wanted to create a fake version of a family—veneers for us to hide behind, sturdy, hardened and polished like candy apples but made of depleted uranium pressed by sheets of steel armor plating. I wanted us to be a family of tanks.”

The investigation ultimately revealed nothing amiss, and the case was closed. But their terror lingered, prompting them to leave the south for a New England state with more progressive attitudes and laws.

“We were shaken,” Hays writes. “We were angry and grieving. We were full of fear. But we were also, as a result, tougher, more thankful, and full of hope. We bounce. That’s what we learned. Our family can bounce.”

Hays, an author of more than 20 books who has also written for National Public Radio and the Washington Post, opted to publish A Girlhood under a pseudonym, changing her family members’ names and blurring their locations. She did this, she explains, not because she believes their daughter’s trans-ness is a shameful secret, but because she knows it is ultimately the kid’s story to tell … or not.

A Girlhood, then, is Hays’s version—in the form of a candid and loving letter to her daughter—of how this exuberant, artistic, perceptive, self-possessed child challenged and changed their family.

Hays, an academic as well as a prolific writer, thought she had parenting figured out by the time baby number four—clearly labeled a boy at birth—came along. Her impulse, when that child began declaring her girlness, was to pay attention, remain curious, and learn.

More than a social construct

The thirst for understanding led her down fascinating paths: the many cultures (Indonesian, Thai, and Navajo among them) with concepts and language for more than two genders, the prevalence of XXY and XYY chromosomal combinations and how those shape the fetal brain and body, the glorious and painful history of trans folk both within and outside of LGBTQ liberation movements.

These investigations never feel expository; instead, they are small, sharp lights that Hays and her husband use as they stumble through unfamiliar territory, learning to explain and advocate for their daughter with teachers, grandparents, physicians, and a Catholic school superintendent who ultimately decides the high school has no place for her.

Along the way, Hays explores, and rejects, the common notion that “gender is a social construct,” citing her daughter’s certainty at a very young age and the mysterious confluence of culture, genetics, relationships, and history that shapes any person’s sense of gender identity.

She writes about how her child’s love of makeup, high heels, Barbies, and purses challenged her own feminism, forcing her to realize it “can’t solely be about being freed from all things girly, but being free to choose.”

And she struggles—as do all parents of a child whose “atypical” qualities also put them at risk—with how to raise that child in self-awareness and pride while also readying them for a world that can be viciously unkind.

Hays recalls telling her husband, “Some places will see [our daughter] as a sign of progressive hope, but in most places in the world, she’s more likely to get murdered. How do I prepare her for all of that?”

He responds: “We’ll parent her like our other kids … They have a place in the world where they know they’re safe and loved. That’s how we’ll do it.”

In the end, A Girlhood is a story of parental love—vast, resilient, fierce—a love that should buoy every child, no matter what, as they bring their most true selves to the world.

A Girlhood: Letter to My Transgender Daughter. By Carolyn Hays. Durham, North Carolina: Blair/Carolina Wren Press, September 13, 2022. 274 pages, hardcover, $28.95. Get it on bookshop.org.