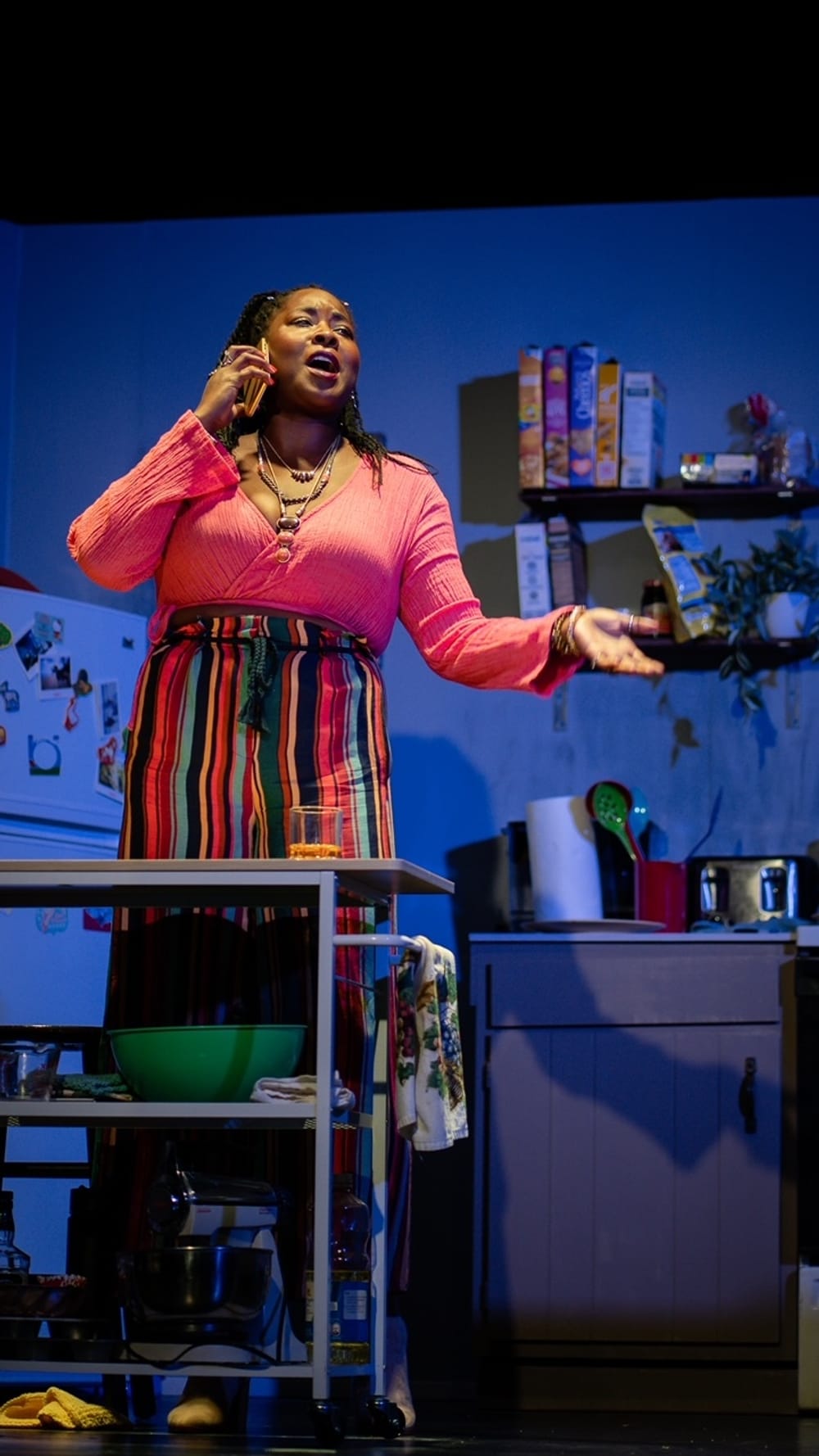 How many times over the last few years have you asked yourself why you should bother to do something future-looking—buy a house, start a career, have a child—when the increasingly rapid onset of climate change so imperils the future? Anecdotally, it’s an increasingly common refrain. But what if the end were coming even faster than we expected? Would you bother to do anything at all? That’s the question in SOON, Nick Blaemire’s new musical, getting its world premiere in a coproduction from 11th Hour Theatre Company and Lancaster’s Prima Theatre.

SOON moves backward and forward in time, leading—it seems at first—to the day the world ends, through the eyes of 20-something New Yorker Charlie (Imani Moss). Locked inside her Greenwich Village apartment with nobody but Hershel the Jewish fish (played by an actual goldfish who is not credited in the program) to keep her company, Charlie is glued to CNN, watching as Florida falls into the ocean and a “state of international emergency” is called by the President of the United States.

It’s a good question. And in Charlie’s case, the answer is not, it seems, spend the last few days with your boyfriend Jonah (Matt Donzella), or your roommate Stevie (Carmen Castillo), or your mother (Ebony Pullum). Instead, it’s to hide out in your apartment and stay glued to Wolf Blitzer.

I suspect many BSR readers have spent quite a bit of time over the last five or so years glued to their televisions (or at least, to their computers), helplessly watching as chaos unfolded. I know that’s how I felt as the January 6, 2021, insurrection unfolded: I couldn’t stop watching, and I knew there was nothing I could do to stop or change what I was seeing. It’s easy to believe that Charlie would be unable to tear herself away from CNN as the climate crisis unfolded in real time.

Even as Charlie’s friends and family try to pull her out of her funk—come to Connecticut, enjoy the unseasonably warm February day, visit the Hamptons—she stays stuck in place, barely even willing to get off her sofa. And eventually we begin to realize that perhaps there’s more to Charlie’s apparent agoraphobia than a fear that melting icebergs will eventually flood her Manhattan home.

Late in the show, the audience finds something out about Charlie that helps to explain her refusal to move on with her life. But at the same time, the show seems to call Charlie’s perceptions of what’s happening around her into question. The resulting confusion at the show’s end is, I think, due to SOON’s status as a new work.

The confusing denouement isn’t the only fault of the script. There are a few standout songs, such as “Waiting” (performed beautifully by Donzella) and “Bar Mitzvah for the First Jewish Fish” (Donzella with Castillo, although I was quite thrown when the inclusion of “Hava Nagila” near the end of the song didn’t follow the traditional tune), but several other songs fail both at advancing the plot and developing the character singing them. Each member of the cast is clearly very talented, and I wished I could have seen the ensemble in a stronger script.

If you want to support new works of theater—especially works that prominently feature queer performers and actors of color—SOON is a fine way to pass 100 minutes of an evening. But if you’re looking for a tightly constructed script or consistently compelling lyrics (or an ending that doesn’t leave you scratching your head), SOON won’t deliver.

Christ Church Neighborhood House is a wheelchair-accessible venue, but the cobbles on the surrounding streets can be difficult to navigate for those with limited mobility.