SWARM., opening June 28 at the Pennsylvania Academy of the Fine Arts (PAFA), is an imperative. The exhibit does not brook hesitation or timidity; it demands that the viewer “swarm, converge, confront en masse” the historical and political exigencies of its creation. Artists Nestor Armando Gil (along with Gil’s collaborative Taller Workshop) and Didier William focus on the histories of identity and Cuban/Haitian immigration to the United States. They suggest that the only way to disempower traditional narratives of colonial power is for viewers to overwhelm them, swarming at them from the varied perspectives introduced by the artists’ own visual explorations.

The exhibit finds loose structure in five aspects of the artists’ approach: revolution, spirituality, process, migratory identity, and affect (affection). With such a broad imperative, these associative groupings reinforce the historic context of the artists’ visual communication. As curator Mechella Yezernitskaya notes, “Ultimately, the artists understand SWARM. as an imperative and we as curators have utilized that imperative to investigate how William and Gil/Taller Workshop swarm — or in other words critically reexamine, transform, or challenge — the histories of colonialism.”

Teeming through message and medium

The multiform nature of the artwork itself also reflects the variety of themes endemic to any “swarm.” The exhibition includes sculpture, printmaking, and painting, as well as an opening performance by Gil of Boca (Your Memories Are My Myths). This opening piece involves the pouring of coffee, sugar, tobacco, and sand into the artist’s open mouth, alluding to the material endurance of colonialism, its impact on the body as "myth" passed from father to son, and the body’s physical and noetic response to this history and memory. 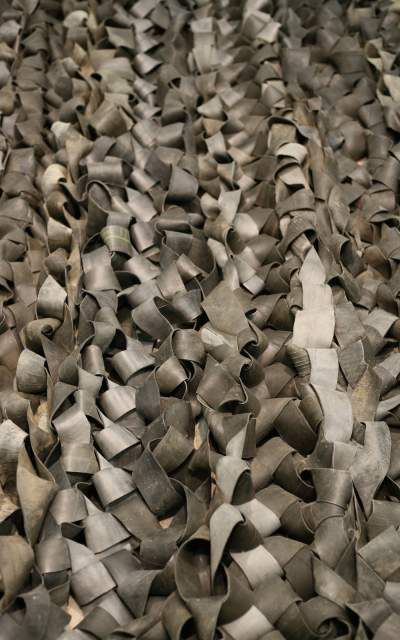 While Boca approaches this from the specific perspective of Spanish and U.S. colonialism in Cuba, “in some ways [SWARM.] has to do with being post-Caribbean islanders in the U.S. and in other ways has to do with the larger question of what it means to be an American,” says Gil.

The ebb, flow, and overlap of temporal and cultural identity are a key aspect of the idea — and very name — behind the show. The fluid nature of the artists’ collaboration, which spanned several years, in part through phone conversations and messaging, is visually represented through the show’s imagery. The physical layout of the gallery also evokes their unspoken influence upon each other. According to a statement from the artists, this lengthy and informal connection meant “the nature of the collaboration ended up being a lot more conversational,” with some fascinating overlap between their own individual projects.

This collaborative exhibition debuted in 2017 in Miami, a place with history steeped in successive waves of Cuban and Haitian migration. As Gil noted, SWARM.’s Miami debut “offered us this interesting history that includes tensions between the cultural groups that Didier and I belong to,” and the exhibit’s Philadelphia incarnation is sure to add yet another layer to the exhibition’s complex historical perspective.

Previewing the Philly music scene in the first half of October

Every frame a song